‘I Just Called to Say I Love You’: Stevie Wonder’s Downfall 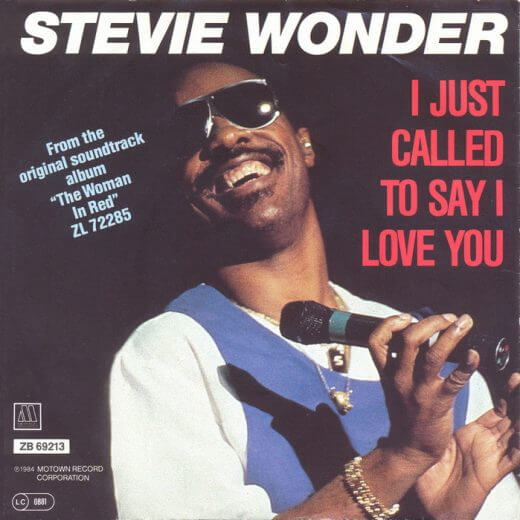 Stevie Wonder is an icon. Period. A child prodigy, he was one of the most successful artists of the 1970s, blending funk, rock and pop into his own genre of music driven by his synthesizer and knack for melody. By all accounts, he’s a musical genius who has influenced a generation of musicians. I’ve listed him as one of the Top 5 most influential artists of the 1970s.

Born Stevland Hardaway Judkins, “Little Stevie Wonder” made his mark at the tender age of 13 with “Fingertips – Part 2,” his first of 10 No. 1 hits. He reached his creative peak in the early- to mid-1970s, with blockbuster albums such as 1973’s Innervisions and 1976’s Songs in the Key of Life. Both won Grammys for Album of the Year. His No. 1 hits during that time included “Superstition,” “You Are the Sunshine of My Life,” and “Sir Duke.”

‘I Just Called to Say I Love You’

The beginning of the end occurred when Wonder collaborated with Paul McCartney for 1982’s “Ebony and Ivory,” which also marked the nadir of McCartney’s artistic output. It didn’t get any worse than “Ebony and Ivory”; the saccharine lyrics, sluggish tempo and cheeky video became the target of critics’ wrath.

“Another disappointment, a namby-pamby, la-di-dah, silly and childish tune,” wrote Bill Carlton of the New York Daily News. Rolling Stone called it a “horrifically cheesy ode to racial harmony.” But the record-buying public ate it up; it spent seven weeks at No. 1 on the Billboard Hot 100 chart.

Despite the song’s popularity, its legacy ranks right up there with Starship’s “We Built This City.” BBC 6 Music listeners voted the song the worst duet in history. Blender magazine named it the 10th worst song of all time. Ouch.

But it got worse for Wonder, who was reaching his peak in popularity. In 1984, Wonder released the ballad “I Just Called to Say I Love You.” It was another huge smash, spending three weeks at No. 1. It won an Academy Award for Best Original Song. But again, the legacy was worse than the success.

It was repetitive, slow and plodding, and dated—a throwaway, really, or something that should have been relegated to a B-side. It was tailor-made for an AT&T commercial; the fact that it wasn’t showed that Wonder had his ethical standards. The song had one message that is apparent in the title, so you didn’t really have to listen to it. Let’s look at the lyrics:

Blecch.
All this happened to a repetitive bassline and a droning synthesizer that sounded dated and uninspired. It’s like a home demo.
Popdose described the song as having “a lyric with the depth of a greeting card, a melody like a nursery rhyme, and keyboards that sound like one of those Casio units people used to buy for their kids.” Double ouch.

In the movie “High Fidelity,” a customer walks into the main character’s record store wanting to buy the record for his daughter. Barry, the music snob/employee (played by Jack Black), refuses to sell it to him.

“Do you have it?” the customer asks.

“Well, it’s sentimental tacky crap, that’s why not. Do we look like the kind of store that sells ‘I Just Called To Say I Love You’? Go to the mall.”

“Do you even know your daughter?” Barry yells. “There’s no way she likes that song!” He pauses. “Oh oh oh wait! Is she in a coma?”

“I didn’t know it was pick-on-the-middle-aged-square-guy day. My apologies. I’ll be on my way.” And that hits the ouch trifecta.

Wonder managed to hit No. 1 twice in 1985 with the slickly produced but forgettable “Part-Time Lover.” He collaborated with Dionne Warwick, Elton John and Gladys Knight on “That’s What Friends Are For,” a song written by Burt Bacharach and Carole Bayer Sager that was first recorded by Rod Stewart, of all people, in 1982. He only had one more Top 10 hit after that.

At age 70, Wonder continues to make music and add to his critical legacy, his 80s mistakes notwithstanding. Songs in the Key of Life is No. 4 on Rolling Stone‘s list of the 500 greatest albums of all time. Innervisions is No. 34. Not even “Ebony and Ivory” can take away from that.