I can see the jokes coming now: “For Styx to jump the shark, that means that their career had to be at a high point at one time.”  Styx usually gets lumped in with other arena rock dinosaurs such as Foreigner, REO Speedwagon and Kansas. They’re about as dated as leisure suits.

But at one time, Styx had quite a streak going: Four straight multiplatinum albums which yielded six Top 10 singles. It seemed that they had a formula going, and it was working pretty well: Guitar-driven rock led by baroque-style synthesizers, melodic phrasing from Dennis DeYoung’s distinct voice, and soaring harmonies. 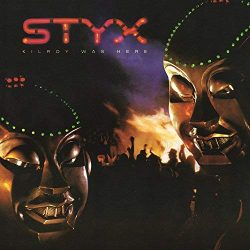 Buoyed by the success of 1980’s concept album Paradise Theater, Dennis DeYoung tried the same formula again, but this time he got his libretto from a bad 1950s sci-fi comic book. Let me see if I can boil this down from the liner notes of the album:

Dr. Everett Righteous, founder and leader of the Majority for Musical Morality, made his living warning Americans about the evils of rock ‘n’ roll music, and how it was responsible for society’s moral and economic decline. The MMM soon gained enough power to have rock ‘n’ roll banned.

Robert Orin Charles Kilroy [R.O.C.K. – get it?] was a world-famous rock ‘n’ roll star. As this new law was passed, Kilroy and his band were finishing a national tour…On the night of the final concert, the MMM marched in and stormed the stage. A fight ensued, and when it was over, an MMM protester was dead…Kilroy was convicted of murder and sent to a prison guarded by Japanese robots.

Jonathan Chance, the rebel leader of an underground movement to bring back rock ‘n’ roll, made Kilroy the symbol of his cause. Jonathan contacts Kilroy by jamming the airwaves of the MMM network, replacing a mind control session with outlawed footage of a Kilroy concert. Inspired by the message, Kilroy plots his escape. Late one night, he overpowers a Roboto guard and takes his identity. He then leaves graffiti coded messages for Jonathan, who discovers the “Rock Code” and leads him to the old Paradise Theatre, now the site of Dr. Righteous’ Museum of Rock Pathology. There he sees the last Kilroy concert mechanically depicted by Kilroy look-alike robots as the violent end of rock ‘n’ roll…and there, he and Kilroy meet for the first time.

It’s almost as if DeYoung created the song “Mr. Roboto,” and then created a libretto based around that song. Oh, and let’s throw Paradise Theatre in there as well to make it look like a sequel! Not only did the members of Styx have to record music that fit this story (Domo Arigato, Mr. Roboto!), but they also had to act out the opera onstage – a horrible experience, according to guitarist Tommy Shaw.

I must admit though, that I grew to like “Mr. Roboto,” annoying as it was, and the power ballad “Don’t Let It End” was classic Styx. I even went to the “Kilroy Was Here” concert with my mother – my first concert experience. But I’ll never forget hearing “Mr. Roboto” on the radio for the first time; when the song was over, the DJ simply said, “My friends, I do believe Styx has finally lost it.” I wondered at the time if he was right.

Styx had only one more Top 10 hit after Kilroy Was Here – the “Don’t Let it End” clone “Show Me the Way.” Tommy Shaw and James Young finally had enough of Dennis DeYoung’s leadership and focus on ballads, and took advantage of a DeYoung illness to implement a coup and replace him with another lead singer. It’s classic VH1 “Behind the Music” fodder – infighting, lawsuits, multiple acts touring as Styx, etc.

To be fair, Kilroy was a microcosm of the bigger problems within the band – Shaw and Young battling DeYoung for control of the group’s direction. This album is just a more entertaining event to point at.