‘Now and Then’: The Last Beatles Single? 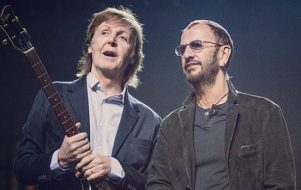 For years, rumors have been swirling around “Now and Then,” a John Lennon demo that remains unreleased. Ever since the 1995 Threetles reunion, fans have been wondering: Could this be the last Beatles single?

Lennon recorded “Now and Then” in his Dakota apartment in 1979; Yoko Ono gave it to Paul McCartney as one of three demos including “Free As A Bird” and “Real Love.” The three remaining Beatles were free to restore, rewrite, remix and release them as part of the Anthology. “Free As A Bird” and “Real Love” were completed and released in 1995, but “Now and Then” remains unfinished.

The three began work on “Now and Then” — the backing track was laid down on the first day of recording, including some guitar work by Harrison, but according to McCartney, Harrison “went off it” and called it “rubbish.” So we were treated to only two new Beatles songs.

“It was one day — one afternoon, really — messing with it,” said ELO frontman Jeff Lynne, who produced the other two singles. “The song had a chorus but is almost totally lacking in verses. We did the backing track, a rough go that we really didn’t finish.”

There was also an annoying hum throughout the track, similar to the hum that was on “Real Love,” but louder. However, a recent bootleg of the demo showed that the hum could be removed without losing quality.

It’s up to Sir Paul

The three gave up on it at the time, but an unnamed source has said that “Paul wants it out badly.” Indeed, in a 2012 television interview, McCartney said, “That one’s still lingering around, so I’m gonna nick in with Jeff and do it and finish it one of these days.” He would have Harrison’s backing track; Ringo Starr could still play drums on it; and he could rewrite and sing some of the vocals, making it a true Lennon-McCartney collaboration.

This last Beatles single would be a perfect epitaph to the Beatles’ – and McCartney and Starr’s – career. It’s not every day you get to hear a new Beatles single, and given the fact that two of the Fab Four are now dead and the other two are nearing their mid-70s, one wonders whether McCartney and Starr will get to it before they quit recording (although McCartney says he will never retire).

Several people close to the Beatles are in favor of it as well; according to The Daily Beatle, Starr’s friend Mark Hudson said, “I’d love to see it happen! Are you kidding? If anybody is going to be capable of making an addition to a John Lennon song, it definitely would be Paul McCartney. And I think he would write it like a Lennon-McCartney song, I really do. I don’t think he would make it too McCartney.”

To get a sense of what the new single might sound like, check out the YouTube video below in which a very talented fan has remixed the Lennon demo himself. Sounds Beatle-y!

2 thoughts on “‘Now and Then’: The Last Beatles Single?”