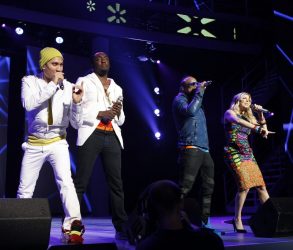 It’s no secret who my least favorite band is. Ever since the Black Eyed Peas unleashed “My Humps” upon the world, I felt compelled to battle all that was wrong with today’s pop music – inane lyrics, tuneless melodies and rapping, and an emphasis of style over substance.

The Black Eyed Peas encompass all of the above. They are a boil on the buttocks of music, somehow having convinced the music-buying public – either through some means of sorcery or a pact with Satan – that they are relevant and hip. Hell, Fergie even peed in her pants during a concert once, but the Pea juggernaut (pun not intended) continued.

Seriously, anything goes for them. They can say the dumbest things in a song, and hardly anyone calls them on it. FunnyCrave ranted about the most retarded Black Eyed Peas lyrics, and some actually tried to defend the lyric “Let me f— up your ear till my sperm is up in your brain.”  Other BEP winners include:

I did not search long for these lyrics; in fact, they were chosen randomly from a list of Black Eyed Peas songs. It’s like shooting fish in a barrel.