The Legal Matters: The Interview 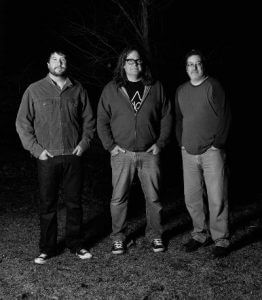 As the release of The Legal Matters’ second album, Conrad, approaches, lead singer Andy Reed spent some time with me to answer a few questions about the new album:

What do you see as the big differences between Conrad and your self-titled debut?

I think the biggest difference is that we really found a sound that we feel represents us as a band on Conrad. During the first record , we were really just testing the waters and getting to know each other on a musical level. This record seems more focused and mature. We really wanted it to feel cohesive.

What was the recording process like this time around?

The recording process was much different as we did it over the span of 5-6 months. We just did 2-3 days a month as well. It gave us time to write and think about where the record was going. Some songs weren’t even written until the day before recording them. That pressure really helped us deliver some fresh ideas as well.

We were genuinely reacting to the music as we were writing and recording. That’s always a lot of fun. We really didn’t have too much time to think about it once we started recording the song. Your musical instinct kind of takes over. We also brought Donny Brown and Andy Dalton in on drums for this record. They are both great drummers and brought great feel to the songs that they played on.

How has The Legal Matters evolved as a trio?

I think we’ve evolved quite a bit as a unit. As I stated earlier, we had more focus on this record. From a sonics standpoint, I really wanted the music to breathe and be more wide open. We composed our parts to fit within that mindset. It made it much easier to mix as well.

How would you differentiate what you do as a solo artist and An American Underdog?

Chris and I both are in situations where we have our solo careers so this really gives us a chance to bounce ideas and collaborate. Keith has always been great at coloring songs as well so we’ve developed a working style that is much different than our individual projects. When it’s just you making decisions, it’s a little tougher. Having 2 other people there helps cement an idea. There is not as much second guessing.

Having Omnivore Recordings putting out this record has us in a much different situation. We have never really played live before. Since it’s going to be a bigger release, we have decided to put a live band together for the release shows. We really have no idea what to expect after that. If it starts to do well, which we hope and anticipate, then we will discuss touring, etc.

Individually, we are all in on The Legal Matters. I don’t anticipate any solo work for a while. I think we are going to just start writing and recording album #3.