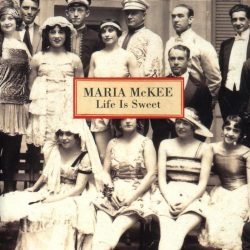 Maria McKee is best known for being the lead singer of Lone Justice, an alt-country band of the 1980s that had a small hit with “Shelter.” McKee herself had a No. 1 single in the UK with “Show Me Heaven” from the Days of Thunder soundtrack.

Her first two solo albums continued the cowpunk style of the “Little Diva,” as she was called. But with Life is Sweet, everything changed. It was loud, it was quiet; it was angry and soothing; it was cacophonous and musical. The contradictions made the album hard to digest for many fans, but I fell in love with it.

“Scarlover” opens with a warbling, fuzzy riff from an electric guitar, and for most of the song, McKee’s voice is tinged with intensity, grief, and anger. But in the chorus, she reverts to her cooing falsetto, and then it’s back to the races. The music is straight out of early 1970s “Ziggy Stardust” Bowie – orchestral and glitzy, almost campy at times, but always serious.

The next few songs continue the Jekyll-and-Hyde roller coaster. “Absolutely Barking Stars” is beautiful and theatrical, while the strings in “I’m Not Listening” could cut glass as McKee’s voice screams above them. “I’m Awake” is mostly in a minor key, slow and calculating, until the end, when strings quietly alternate between a major and minor key, instantly changing the tone of the song, until they drift off to sleep.

But there’s nothing bizarre about the title track and its coda, “Afterlife.” It’s a simple, affirming ballad that swells in production until “Afterlife” introduces beautiful strings set to booming tom-toms that mimic a heart beating at rapid pace. And after the music fades away, your heart may be beating this quickly.

Such a change in direction for McKee was equivalent to career suicide; after the release of Life Is Sweet she parted ways with her record label and has continued recording and releasing albums on independent labels. But as she sings in the title track, the album is exactly what she wanted. “This one is for the girl who says those voices in her head/ Never leave her alone/ Don’t listen to your teacher, you’re not crazy/ Just smarter than the rest of them.”

I think she is smarter than the rest of them. And she created a masterpiece with Life Is Sweet.