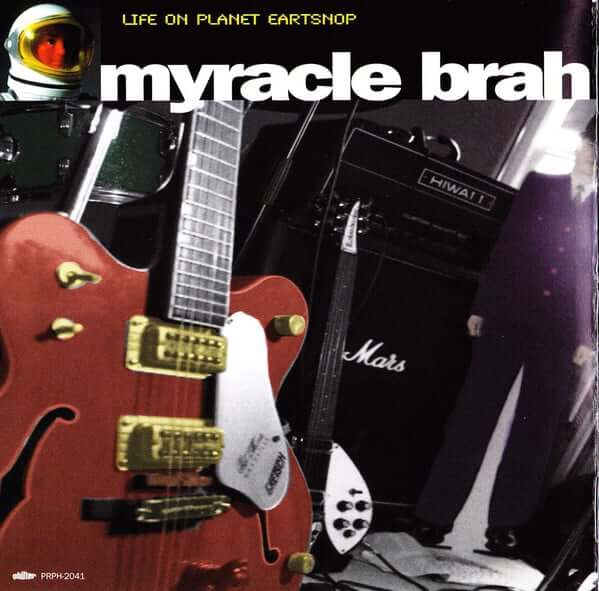 Andy Bopp is a songwriting machine. Like his contemporary, Robert Pollard of Guided by Voices, he has churned out album after album over the past — 22, according to his website. These include solo albums and his two bands, Love Nut and Myracle Brah.

Myracle Brah (forgive the pun) is the more pop-oriented outlet for Bopp’s creative musings. Their first album, 1998’s Life on Planet Eartsnop, is composed of 20 songs, with all but one clocking in at under four minutes. Four of the tracks are under two minutes.

There’s something magical about a two- to three-minute pop song. Unlike a classical piece, which can depict certain moods in its movements, a pop song usually delivers one message — usually one of joy or love, and it delivers it in a way that burrows into your skull and stays there for hours, even days sometimes. They’re earworms, and before you grow tired of them, they are good roommates, filling you full of joy and happiness for the short duration that they’re present.

In a way, Myracle Brah’s Life on Planet Eartsnop is one big medley a la Side Two of the Beatles’ Abbey Road, although not as cohesive. Each song is one idea in Bopp’s head that he had to get down on tape. He rarely has time for bridges and codas. It’s verse and chorus. It’s as if it were such a fleeting moment that he got the idea, ran over to the tape machine, pressed record and let the vein flow.

Since he rarely has time for these more sophisticated song structures, he pours as much melody into each song as he can, and they sometimes overflow a single wonderful idea, repeated just a few times so it doesn’t get monotonous. He presents them in a flash and forces us to play two-minute songs five times in a row so we can listen to the lightning in a bottle that he captured.

The album opens with “Whisper Softly,” two minutes and four seconds of absolute bliss. “Regardless if it’s black or white . . . You love me furthermore so whisper softly,” he pleads to a syncopated drumbeat. The lyrical ideas are also simple but fit the feelings presented in the melodies. “I’m in Love” is a simple expression of joy, with a gorgeous melody played over a basic chord progression. “When I’m down, and you make it right / It’s because I’m in love,” he exclaims. It lasts 1 minute and 48 seconds, and there’s not enough time for Bopp to wax poetic about his feelings.

In “Getting Over Delusion,” Bopp is more direct, but the melody is just as wonderful. And before you know it, after just 1 minute and 30 seconds, it’s over. In “Carry on the Lie,” a more sobering song, Bopp moves subtlety from a I chord to a chord — a poignant moment that captures the emotion present in the words.

It goes on like this for about 50 minutes—song after beautiful song, and you wonder if Bopp is going to run out of tricks. He very rarely repeats a motif, and the sound is akin to Big Star or Badfinger, which of course, also brings to mind the Beatles.

There’s something charming about a two-minute pop song, and with Myracle Brah’s Life on Planet Eartsnop, you get 20. There’s not a bad track among them, and it remains one of my hidden treasures that I and only a few thousand people worldwide know about it. That’s the thing about unknown indie artists — they remain in your pocket, and you take them out to listen to them and know that you’re one of the few in on the secret. It’s sad for the artists, but satisfying for the fans.