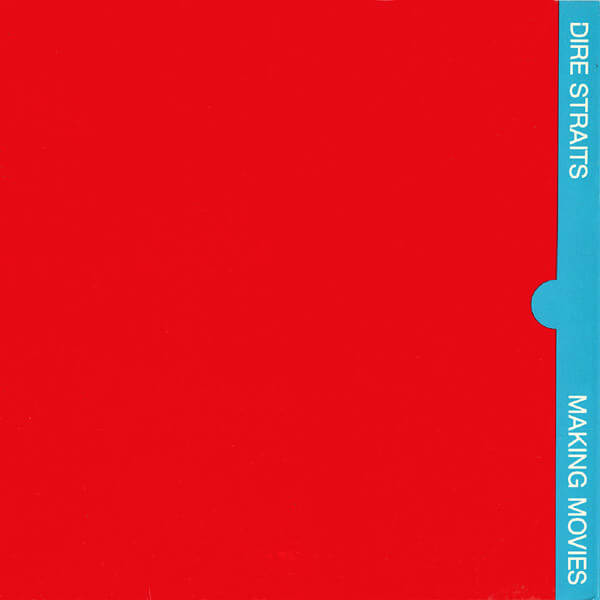 Making Movies is Dire Straits’ third album and features one of the most boring LP covers of the decade (see right). For the group, the third time seemed to be a charm. Their first album, 1978’s self-titled album, featured the how-the-hell-can-he-play-that-fast hit “Sultans of Swing,” which featured leader Mark Knopfler showing off his talents on the guitar.

Communique was considered a sophomore slump, and for Making Movies, Knopfler got Patti Smith and Bruce Springsteen producer Jimmy Iovine to produce it and borrowed E-Street Band keyboardist Roy Bittan to play on the album.

The album is short but sweet, clocking in at just under 38 minutes. It consists of only seven tracks, with most over six minutes long. It begins surprisingly with a riff from the musical Carousel, which leads into “Tunnel of Love” (a title that Springsteen himself would steal some seven years later). It’s a typical Dire Straits song filled with Knopfler’s excellent guitar playing and his rough, half-speaking voice that recalls Bob Dylan at his better moments. In the song he references “money for muscle,” a phrase he would tweak for 1985’s monster smash “Money for Nothing.”

But it’s Bittan’s keyboard that makes the difference here, filling holes where Knopfler’s guitar playing takes a break. And Knopfler’s songwriting has grown and matured. The result is a Springsteen-esque tapestry of theatrical stories, many of which last more than five minutes. “Tunnel of Love” itself lasts over eight minutes. In the age of LPs, that means only seven songs grace the album.

“Romeo and Juliet,” a country-rock ballad later covered by the Indigo Girls, is a tale of a failed romance Knopfler had with a singer. It begins with a single guitar and then launches into the typical Dire Straits sound as Knopfler sings, “When you can fall for chains of silver you can fall for chains of gold / You can fall for pretty strangers and the promises they hold / You promised me everything, you promised me thick and thin, yeah / Now you just say “oh, Romeo, yeah, you know I used to have a scene with him.”

Bittan leads off “Hand in Hand,” a beautiful song of failed love, as Knopfler hints at a romantic tale in the title but quickly tells us, “The sky is crying the streets are full of tears / Rain come down, wash away my fears.”

What Knopfler lacks in melody he makes up for in instrumentation and arrangement. His guitar playing complements the lyrics, either through call-and-answer motif or an alternate melody that plays while Knopfler sings. If you’ve heard “Sultan’s of Swing” and “So Far Away” from 1985’s Brothers in Arms, you get the idea.

It’s too bad the album ends on such a sour note; “Les Boys” is homophobic and should have been scrapped for something else — an impromptu jam with no Knopfler “singing” would have been preferred.

Making Movies is Dire Straits finding their sound — a sound that they would continue to hone and experiment with until they struck it big with Brothers in Arms. If you’re looking for a melodic pop record, there’s not much here, but the artistry still comes through in the lyrics and instruments.