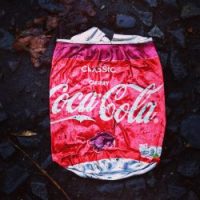 It was 1991. I was a year out of college, feeling as if I was ready to take on the world by storm and change it all by myself. I had a job in journalism — not a high-paying job, but a job that gave me a sounding board of which to state my far-left political views and somehow — someway, change people’s minds and, ultimately, the country.

One Saturday, I felt on top of the world. I felt as if I was making a difference already, that I was rising to the top. I had checked out a book from the library entitled, appropriately, 50 Simple Things You Can Do to Save the Earth. One of the things to do was pick up trash, and one was recycle.

So I set out in my 1982 Datsun 210, equipped with a couple of garbage bags and a pair of gloves,  and went down the highway collecting bottles and cans. I felt like I was reversing the downward spiral that our materialistic ways had created.

Playing in my cassette player was The Sundays’ Reading, Writing and Arithmetic. “Can’t Be Sure,” one of my favorite songs from the album, began to play, and I felt as happy as I had ever been. “It’s good to have something to live for you’ll find / Live for tomorrow.
I sang at the top of my lungs as I searched for little ways to make Griffin, Ga., a better place to live.

“Can’t Be Sure” is easily the best song in the Sundays’ short three-album career. It’s in the key of D and begins with a rapid tom-tom resembling thunder. Then guitarist David Gavurin plays just two notes alternating, but the notes linger for what seems like forever. The upper notes of the guitar change, creeping up and down the scale, but the bottom note stays the same. It’s really that simple, but Gavurin captures the emotion and feeling of staying inside on a rainy English day.

Lead singer Harriet Wheeler’s strong but childlike voice echoes throughout the song as Gavurin continues his two-note cadence. She’s a little unsure of herself but doesn’t really care, singing, “It’s my life / And though I can’t be sure what I want anymore / It will come to me later.” And she was singing to me that day. I had no idea where I would be in five years or two, but on that day, it didn’t matter.

Twenty-five years later, I volunteer less, and my feelings of changing the world have lessened to decisions about whether to get the windows in my house replaced. But I still love music, I still love “Can’t Be Sure,” and from time to time I look back and smile at my idealism. It was a lesson in altruism — how volunteering can lift one’s spirits. But it’s also an example of being at the top of your own little world — doing something good for mankind while listening to your favorite song. What two better things could go together?