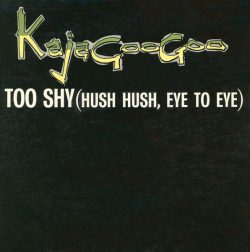 Memories of a Place

In the summer of 1983 my father packed me and my family in the 1975 Impala station wagon and headed up to Murfreesboro, Tenn., so we could be with him as he worked on his doctorate in English. We stayed in the married housing units, which were small, sparsely furnished two-bedroom apartments.

I was 14, just about to be old enough to get my learner’s permit. I knew no one within 250 miles of Middle Tennessee State University, so all I had was my music. And I listened to it constantly, keeping the radio on 14 hours a day, making tapes of my favorite songs playing on the radio, then playing that whenever the radio wasn’t on. As a result, the hits of 1983 are forever branded into my memory.

It was a pivotal time for me and the music industry. (Isn’t it always?) I went to my first concert that summer at MTSU’s Murphy Center to see Styx (with my mom). I also saw my first R-rated movie, “Flashdance,” (also with my mom – she’s very hip). As for music, the old guard – Elton John, Billy Joel, and the classic rock bands from the 1970s (Journey, Foreigner) were all gasping their last breaths, giving way to…what was it? From across the Atlantic, we heard rumblings of a new British Invasion, led the previous year by Culture Club, the Human League and Duran Duran. It was full-on in 1983, though, and we Yanks couldn’t get enough of it.

The Summer of Music

That summer, Duran Duran’s “Is There Something I Should Know?” was one of my favorites – it had been released in the UK even before “Hungry Like the Wolf,” but we were just getting to hear it in America. I saw the video for Spandau Ballet’s “True” and suddenly wanted to dress in a skinny tie and suite with my hair styled just like lead singer Tony Hadley. Madness’ “Our House” had addictive chord progressions and key changes, and a lead singer with a Cockney accent so strong I still can’t figure out what he is saying.

But the essence of that summer, whittled down into one song, was Kajagoogoo’s “Too Shy.” At first, I thought the lead singer was a girl, but then I saw a picture of the group and, well, the lead singer’s hair still looked like a girl’s (see above, far right), but Rolling Stone assured me that the lead singer, with a unisex name such as Limahl, was indeed male. The song featured synthesizers galore, sounding like something from the future, and the chorus was so maddeningly catchy, with its “hush hush, eye to eye” (what does that even mean??).

I was definitely too shy that summer; I talked to no one but my family for a few months as I turned introspective and fell headfirst into teen angst. And Kajagoogoo, like many victims of the British Invasion, eventually retreated with their One Hit and left our country vulnerable to Huey Lewis, late model Genesis and Whitney Houston. My parents still hum songs from that summer as well, giving us a New Wave link that I’m sure few families share.