‘One Night in Bangkok,’ Murray Head 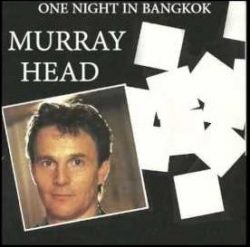 Memories of an Event

No, the event doesn’t involve a crazy night in Bangkok.

It involves a trip to Atlanta for a legislative conference and a quest to find a soundtrack to a musical that wasn’t even released yet.

In 1985, the British Invasion was hanging on for dear life, but I couldn’t get enough of it. In fact,  my friend Frank had found a radio show called “Future Hits” in which we could hear what was a hit in England before it hit the United States. (Today you can grab a pirated demo of a song six weeks before its worldwide release.)

“One Night in Bangkok” was an odd little Europop song featuring Murray Head rapping about chess, Tirolean spas and lots of other places that I had never heard of.  It was one of those anomalies in pop music – almost a novelty song.

Written by the two guys from ABBA, it was from a musical that was soon to be released in the UK called “Chess,” a play about um, two chess players. Aside from the rap, the chorus was forgettable. The only reason that this song would have become a hit was its popularity in the clubs.

About the time “One Night in Bangkok” was being released in the United States, we heard another single from the musical on “Future Hits.” It was a ballad by Elaine Paige and Barbara Dickson called “I Know Him So Well,” and it held a death grip on the top of the UK charts for several months.

One hit from an album was nothing; in fact, it was the norm in the 80s. Two hits, though, was something to take notice of.

I wanted the “Chess” soundtrack. Trouble was, I had no idea where to get it.

Finding a Needle in a Haystack

Record stores were nonexistent in north Georgia, and the department stores didn’t carry the soundtrack. The mall in Gainesville didn’t, either. So when I traveled to Atlanta for a mock legislative session for YMCA clubs, I jumped at the chance. I convinced my adviser to stop by Turtle’s Records and Tapes to get it.

I still remember sitting in the school van, taking the cellophane off the double cassette case and reading the libretto to the rock opera, finally understanding the context of “One Night in Bangkok.”

I heard “I Know Him So Well” in its entirety, loving every second of it, and found its sibling in the touching “Heaven Help My Heart.” And my teen angst latched on to “Pity the Child,” a self-absorbed, angry anthem.

(The trip to Turtle’s was the first of many detours I made people take in my quest for music. Two years later, I convinced the driver of a charter bus to stop at a mall in Macon, Ga., so I could get U2’s The Joshua Tree on the day it was released. And during a trip to the dentist, I made my mother drive 20 miles out of the way to grab Michael Jackson’s Bad.)

I finally got to see the real musical some 20 years later when it came to the Fox Theatre in Atlanta. I smiled as I watched the songs of my youth being performed on stage – just a few miles from where I triumphed in my quest to find “Chess.”