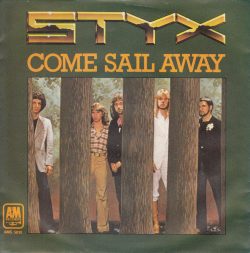 I was born to be a rock star.

I knew it from the minute I heard the Bay City Rollers’ “Saturday Night” and saw the lads from Scotland getting mobbed by fans. I saw the frenzy that their music created, heard the music flowing effortlessly from their instruments and immediately understood the power that music possessed. And I wanted that.

My friend Mark understood it too, and pretty soon, using tennis rackets for guitars, we began an early version of karaoke playing at talent shows, church socials, and school programs. (Read more about this at “My Brief Career as a Rock Star“.) That was cute when we were 8, but as the group matured, we knew we had to start playing real instruments. Eight-year-olds pretending that tennis rackets were guitars was cute; ten-year-olds doing the same thing just seemed odd.

We had already been “performing” Styx’s “Come Sail Away” for a few years — it was part of our set list, if you will — but one day I got my hands on the sheet music. This was it. My chance to transform into a real artist. I eagerly sat down at the piano and began deciphering the opening measures. Each hand played alternating strings of eighth notes – never at the same time, which was tricky and took a fair amount of coordination. But I stuck with it, and soon had it down pat.

The rest of the song was just as challenging though, and I realized that I couldn’t keep up the eighth note drill while singing. It was then that I discovered that the pictures of the guitar frets with the fingerings on them signified chords. And these guitar chords shown above the complicated piano lines could be played just as easily on the piano. “C” meant, well, a C chord playing a C in the bass. G/B meant a G major chord played with a B in the bass. It changed the way I played the piano (much to my piano teacher’s chagrin); I could play any song just by looking at the chords.

I made it through the rest of the song in about five minutes.

We made our debut at a talent show in the school “cafetorium” (a cafeteria that doubled as an auditorium); by that time we had grown to a true group of five, including one person who owned and played a real electric guitar. But making music is not as easy as it looks.

As I played the piano and sang “Come Sail Away” — practically offstage due to the placement of the piano — the rest of the group stood there on stage continuing to play air guitars and drums as our one guitarist tried to stay in sync with me. I couldn’t see him, he couldn’t see me. There were no drums playing, no cool synthesizers to play the long bridge, no bass guitar. It was our first and last live performance.

I went on to master lots of songs just by figuring out the chords, and as I entered high school I was able to entertain the crowds at the high school basketball games by playing the electric piano (this time with a drummer). My knowledge of chords helped me in music theory classes in college as I briefly flirted with a music major. Now I look at chords in pop music as more of an academic study; I try to learn the secrets behind chord progressions and discover why certain chords are so mesmerizing.

My friends still chuckle at my spot-on Dennis DeYoung imitation, even when doing a karaoke version of “Mr. Roboto.” Little do they know that it is the result of years of singing “Come Sail Away.”

Whenever the opening piano motif comes on the radio, I still remember the hours of practicing it. I remember standing in front of dozens of people as I sang to them “this song of hope.” And I smile at my discovery of chords, chord inversions, diminished triads and a whole new world of music theory being opened up by those little pictures of the guitar frets with the funny letters above them.