Movie Review – Big Star: Nothing Can Hurt Me 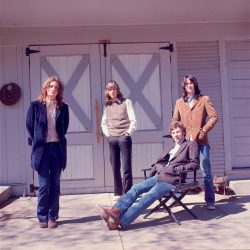 For every feel-good rock ‘n’ roll story, there are 10 tragic tales of artists who never made it. And few are as tragic as the career of Big Star, the revered godfathers of power pop.

Formed in 1971, the band seemed primed for success (The first album by a group called Big Star was called “#1 Record” – how cheeky is that?). But terrible business decisions and bad luck made the record a dismal failure. The band began splintering even before their second album, “Radio City,” and by 1978, the band had broken up after only three critically acclaimed but low-selling albums, and one of the founding members, Chris Bell, had died in a car accident.

Now, countless bands count Big Star as an influence; without them, there would have been no “My Sharona,” no Teenage Fanclub, no Weezer. R.E.M. and Wilco have counted them as inspirations. Not a bad legacy, but it does leave one wondering “What if?” or, even better, “Why?”

The main purpose of Drew DeNicola and Olivia Mori’s documentary “Big Star: Nothing Can Hurt Me” is not to answer those questions but to widen the small but still growing number of fans. Based on interviews of surviving band members (co-lead singer Alex Chilton died in 2010), music producers and family and friends, it plays like a two-hour episode of VH1’s Behind the Music.

Big Star was born in Memphis, directly in the shadow of Elvis Presley’s Graceland and R&B label Stax Records. And quickly, those around the band knew that there was something different about this band: Guitar-driven pop music that was a little rawer than the Beatles, not as soulful as the Rolling Stones, and not as heavy as Led Zeppelin. When you listen to the songs in Nothing Can Hurt Me, you hear a primitive version of the 80s alternative scene and even the 90s grunge movement. You hear sweet melodies and angst-ridden vocals. You hear touches of genius around the rough edges.

This was Memphis, not Los Angeles or New York. A bunch of guys with Southern accents were creating music and promoting a band that they knew possessed something special. But despite reviews from critics bordering on worship, bad distribution deals made their first three albums virtually unknown. You see the band fall apart before your eyes, realizing that you’re falling in love with the music but knowing what happens in the end.

There has been a revival of Big Star in the past few years, and their appreciation and legacy has grown. You’ve heard their songs as the theme of “That 70s Show,” and seen their influence on an intentional misspelling of Katie Perry’s “California Gurls” (Perry’s manager was a fan of the band and asked her to spell “girls” with a “u”, according to Wikipedia.) When Chilton died suddenly in 2010, shortly before a performance of the reunited surviving members at the SXSW music festival, acclaimed musicians such as R.E.M.’s Mike Mills, The Lemonheads’ Evan Dando and Susan Cowsill turned the performance into a spontaneous memorial and celebration of Chilton and Bell’s group. It was too late for them – especially for Bell, who never enjoyed the revival – but just in time for a new generation of fans.

“Big Star: Nothing Can Hurt Me” is inspiring, nostalgic and depressing all at one time. Like “Behind the Music,” it leaves you with a desire to listen to every Big Star album, relish in its hidden genius and hope that it doesn’t happen to other bands.