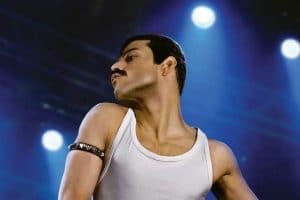 I had heard all the criticisms of “Bohemian Rhapsody,” the biopic of Freddie Mercury and the band Queen: that the songs were out of historical sequence, that the movie writers took liberty with certain events in Freddie’s life and changed them, that the Wembley Stadium crowd was computer-generated.

But I didn’t care.

All I wanted to see was Mercury and the band performing their greatest hits in the movie, to see the rise of the band, and to experience the drama and tension within the band as Mercury spun more and more out of control.

I was not disappointed. If you wanted to see a historically accurate movie of the band, watch VH1’s “Behind the Music.” This is entertainment, with movie makers taking liberties to fit 15 years of the band’s history into 120 minutes.

I won’t dwell on the inconsistencies and mistakes. What matters is the music, and we get plenty of it in “Bohemian Rhapsody.” Snippets of almost all the Queen classics appear in the film, with special attention being given to “Killer Queen,” “Bohemian Rhapsody,” “We Are the Champions,” “Hammer to Fall” and “Radio Ga-Ga.”

Rami Malek does a superb job of portraying Mercury, both pre- and post-mustache. His flamboyance and amazing stage presence are apparent from the beginning; and while we get a little too much of the relationship between him and Mary Austin, we see the change creep in as Mercury realizes his true sexuality and dives recklessly into it.

The other band members do an admirable job of mimicking the stage antics of the band: Brian May studying his guitar technique like the astrophysicist he is; John Deacon busy finger-picking his way through the memorable bass lines of many Queen songs; and Roger Taylor pounding away emotionally on the drums.

There are some depressing moments in the film as Mercury realizes he is suffering from AIDS and tries to make amends with the band members and his estranged father. But Hollywood likes a happy ending, and “Bohemian Rhapsody” ends on a high note with Queen’s memorable, show-stealing performance at Live Aid in 1985. In this scene, which encompasses most of Queen’s 20-minute set, Malek mimics Mercury’s strutting and stage command to a T; apparently, he studied films of Mercury for hours to get every nuance correct, right down to the kiss he gives the camera, interpreted by the movie as a kiss to his family.

The supreme test of a biopic is whether you want to learn more about the subject after seeing the movie. Afterward, my parents wanted to hear more of Queen’s music, and I obliged. We all reveled in the amazing talents of all four band members and counted ourselves lucky to have seen an emotional movie and learned more about one of the great bands of the 70s.