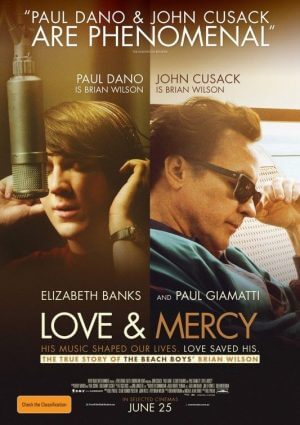 Brian Wilson is the forgotten genius of the 1960s. His group, the Beach Boys, was constantly being compared to the Beatles, and some say that Sergeant Pepper drove him to madness as he tried to up the ante with his (until recently) unfinished magnum opus Smile. And his image has been tainted by Mike Love touring the country with a bastardized version of the group, wearing Hawaiian shirts and singing “Kokomo” and “Little Deuce Coupe” at county fairs.

The truth is made known in Love & Mercy, the new biopic starring John Cusack and Paul Dano as Wilson. Unfortunately, not many people will get this message; the movie isn’t doing well at the box office, having grossed only $9.2 million as of June 26.

And that’s a shame, since Wilson’s music on Pet Sounds rivals the Beatles at their best.  He longed to shed the surfer image that the group had; in one particular scene in which Love is pressuring Wilson to return to the group’s “roots,” Wilson pounds the recording console and exclaims, “We’re not surfers, we never have been, and real surfers don’t dig our music anyway!” Wilson heard music in his head and ached to get it down on paper and into the many instruments he employed to make Pet Sounds. Unfortunately, music wasn’t the only thing he heard in his head, and the movie documents Wilson’s slow dive into instability with a sadness and desperation that both Dano and Cusack reveal perfectly.

The movie flips back and forth between the Brian Wilson of the 1960s and the Wilson of the 1980s, who was trapped under the totalitarian control of psychiatrist Eugene Landy (played with a menacing touch by Paul Giamatti). Dano plays the younger Wilson to a T, evoking all his mannerisms and voice, and you get a sense of how complicated and beautiful Pet Sounds really is. It’s not just “Wouldn’t It Be Nice.” A particularly poignant scene shows Wilson playing an early draft of the perfect pop song “God Only Knows” to his abusive father, who dismisses it, much to Wilson’s disappointment.

Cusack plays Wilson as an unstable, frightened person who is sometimes drugged, sometimes lucid, but always vulnerable. Unfortunately, I’m such a big Cusack fan that I couldn’t separate the actor from the character many times. But he excels at showing us the deep hole Wilson was in at the time – displaying the confusion and desperation that Wilson felt. Elizabeth Banks, who plays Wilson’s future wife, does an admirable job of showing how her character loves Wilson despite his many flaws.

The movie documents Wilson’s return to normalcy, which makes the movie somewhat uplifting. But it’s sobering to watch Dano’s Wilson plunge into a nervous breakdown. So many notes, so many things were going on in Wilson’s head. There’s a thin line between genius and insanity, and it seems Wilson rode the line throughout his life.

I’m going back and listen to Pet Sounds with headphones, and will probably cover it in A Second Listen post. I’ve never fully appreciated his talents, but Love & Mercy has turned a spotlight on them. I only wish many others could see Wilson in this light.