‘No Reply At All’ – Genesis 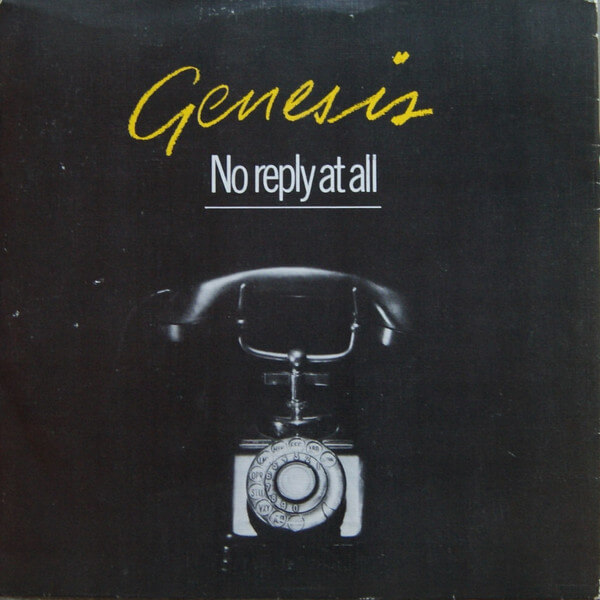 For many diehard Genesis fans, “No Reply At All” from the 1980 album Abacab was the beginning of the end of their relationship with the band. For more than a decade, they had bought albums that featured songs with puzzling names like “All in a Mouse’s Night” and “The Fountain of Salmacis” and some tracks that clocked in at over 10 minutes long. They had marveled at the quintet’s theatrical stage shows in which lead singer Peter Gabriel sported fox heads and long dresses. That was art.

But Gabriel left the band in 1975 to pursue a solo career, and the band turned to drummer Phil Collins for its lead singing duties. That is where fans diverge: the Gabriel Genesis and the Collins Genesis.

What was “No Reply At All”? It starts out with horns, for chrissakes — something unheard of in a Genesis song. In the key of D, it’s instantly toe-tapping, with trumpets accenting the beginning of every few measures and filling in at random moments. But when you get past the shock of Earth, Wind & Fire’s horn section on a Genesis album, you hear Phil Collins’ rumbling drums carrying the song along at a quick tempo, aided by Mike Rutherford’s intricate bass lines that sometimes mimic the melody. Collins pleads with his lover, “Talk to me / You never talk to me.”

The song moves to a minor key toward the end of each verse, resolving back to the D and repeating until the refrain, when the key changes down to a C — not an easy feat. And moving down to another key makes the song lose momentum. Usually, key changes move up, creating a lift and infusing new energy into the song. How does Genesis pull this off without bringing the whole song down?

More horns! Collins also comes up with an unforgettable melody that moves up the scale (“I get the feeling you’re trying to tell me / Is there something that I should know?”), and Rutherford copies him by playing harmony to Collins’ melody. Who says bass lines have to always be the root of a chord? A series of complicated chord progressions at the end of the refrain, along with the brass, takes us back to another verse.

It’s the bridge, however, that gives us a complete 180-degree turn. Rutherford’s acrobatic bass playing gives way to simple whole notes that begin on F#, even though the key is D. This is a first inversion of a D chord — a D chord with the F# in the bass instead of a D. It makes the whole song a little less stable and lends to Collins’ lyrics, which become more vulnerable and personal:

Maybe deep down inside I’m tryin’ for no one else but me.

Collins’ beats die down to a soft hi hat, and Tony Banks’ piano sounds through the bass. It’s a welcome reprieve from the speedy, brass-punctuated melodies we’re used to.

The band repeats the bridge, with Collins’ voice going up an octave, vulnerability giving way to frustration as he sings:

But maybe deep down inside, I’m lyin’
To no one else but me
Oh, but my back is up. I’m on my guard
With all the exits sealed

And then it’s back to the R&B-inflected pop until it fades away, with Collins asking, “Is anybody listening? No reply at all . . .” Although it’s short for a Genesis song, it’s still 4 minutes and 38 seconds long — an eternity by pop music’s standards.
Many people think this was the beginning of Collins’ scheme to turn Genesis into a pop group. Maybe it was, but the band’s drummer, who would lead the band into pop oblivion with 1986′ “Invisible Touch” and “Throwin’ It All Away,” says “No Reply At All” was a team effort. “It probably sounds like I wrote it because I suggested the horn lines,” he recalled in an interview from his website. “Prior to that, the band wasn’t really interested in using horns in our music. The way the tune came about was, like most of our compositions, through improvising in rehearsal. We just get together and play, and if we find something we like we record it.”
Inexplicably, no one bought it — literally or figuratively. Some Genesis fans still ridicule the song, which reached only No. 29 in the Hot 100 and wasn’t even released in the UK. Hearing it on the radio is a rarity; it’s a lost single which still remains a perfect pop song.