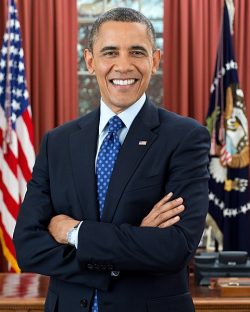 Tonight, as I was watching Barack Obama’s acceptance speech, I couldn’t help but focus more on the music than the message. And I must admit, for the most part, his taste, or his handlers’ taste in music, is pretty good.

He covered it all, starting with Stevie Wonder. You can’t go wrong with Stevie. Despite “I Just Called To Say I Love You,” he is just a likeable guy. I could have done without Michael McDonald, who always sounded as if he had swallowed a golf ball, or his tongue, or something that made his voice sound like a perpetual yawn. He sang “America the Beautiful,” and I had to laugh when he encouraged everyone to “sing with me,” not realizing that no one could guess how he was going to improvise and syncopate the song.

Then there was Springsteen’s “Born in the U.S.A.,” a necessity in American politics, and then U2, another newer necessity. Obama had previously used “Beautiful Day” at his rallies, but this time it was “City of Blinding Lights,” a good choice.

After the speech: something by Brooks & Dunn. Apparently the words of the song fit his candidacy and personality, and it probably did appeal to a certain demographic, but it just seemed – um, out of place after the speech of the year. But the evening closed with “Titans Spirit” from the “Remember the Titans,” a nice orchestral piece that sounded straight out of “The West Wing.”

We’ll see what McCain does next week with his music.