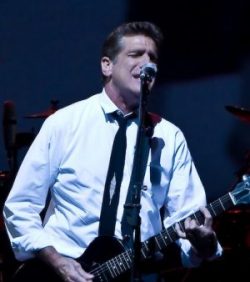 January has been a cruel month for pop music – first Natalie Cole, then David Bowie, and now we learn that Glenn Frey of the Eagles has died at 67. At this rate, I want winter to be over with before Death takes any more of our stars.

I’ve never been a big fan of the Eagles (sorry, Mom and Dad). I own no Eagles records or mp3s. To me, they were just….there: non-threatening California-style musicians making lots of money playing soothing, sometimes almost rocking music to millions of people who have different tastes than I.

A quick search of the Internet finds that I’m not alone; some people absolutely hate the group, including Robert Christgau, the self-appointed “Dean of American Rock Critics,” and the Dude from “The Big Lebowski,” who would rather get thrown out of a cab than listen to “Peaceful Easy Feeling”.

The Eagles were quintessentially American, playing roots-type country music; they had 10 top 10 hits in the USA, 5 of them hitting Number 1. By contrast, only “Hotel California” hit the top 10 in the UK, where it managed to inch up only to Number 8.

Frey was the voice behind such hits as “Take it Easy,” “Heartache Tonight,” and the closest thing to a song that I liked: “New Kid in Town.” I remember latching onto it when it came out; the verses were typical Eagles, but then it transitioned to a minor key for the chorus – something unusual but captivating. It was something different, and I liked it.

Glenn Frey had a decent solo career as well in the 80s, and “The One You Love” and “You Belong to the City” were standout tracks, although “The Heat is On” has to rank up there with “The Heart of Rock n Roll” as the most mundane song of the decade.

But as much as I want to dislike them, there was something timeless about them, something that made you put up with them regardless of your feelings. As Christgau pointed out, “Do I hate music that has been giving me pleasure all weekend, made by four human beings I’ve never met? Yeah, I think so. Listening to the Eagles has left me feeling alienated from things I used to love.”

Who knows if this is the end of the Eagles, if they’ll continue to rake in millions of dollars going on tour without Frey? It’s hard to imagine the Eagles without the voice of Glenn Frey. And it won’t make me like them any more or less than I already do.