On the Passing of R.E.M. 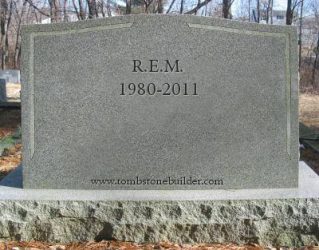 I was saddened to hear the news today that R.E.M. had decided to call it quits. But it was time. Long past time.

Some have lamented that R.E.M.’s last few albums haven’t been up to par, that they were losing steam. But they haven’t released a truly great album since 1992’s Automatic for the People. Drummer Bill Berry left the group in 1997 to be a farmer, and the band really hasn’t been the same since. Each album since then has grown increasingly boring and middle of the road; it’s as if they had grown tired and uninspired. Maybe today’s announcement was them admitting that their best music was behind them (although they would never admit that).

Granted, they had a few memorable moments over the past 20 years. “At My Most Beautiful” from 1998’s Up was way out of their comfort zone – timpani, piano, bass harmonica – but it was indeed beautiful. The first three songs of 2008’s Accelerate made me sit up and take notice, but it dwindled in intensity.

My Introduction to R.E.M.

I’ll always remember the first time I heard R.E.M. It was “Fall on Me,” back in 1986. I was a freshman in college and was looking for something out of the mainstream. From the first sounds of the acoustic guitar and Michael Stipe’s poetic, political lyrics, I was hooked. I cruised the streets of Young Harris, Ga., with my friend Robby, with Lifes Rich Pageant on full blast as we tried to find our way out of the small town and discover something meaningful. We joked at how silly the lyrics were to “Swan Swan H” (“What noisy cats are we?” WTF?)

I traveled down to Atlanta with my friend Bruce to see them perform during the Document tour in 1987, then rode back to Gainesville, Ga. at 2 a.m. to camp out for tickets to see U2. At the school dances, I jumped and swung my arms to the point of collapse when the DJ played “It’s the End of the World As We Know It (And I Feel Fine).” These were my rebellious, punk rock years. This was my own stable form of anarchy.

As R.E.M. grew more poppy, I was right there with them. I remember playing 1989’s Green in the campus newspaper office at 1 a.m. as I worked against deadlines. I was on my own in 1991 when Out of Time was released, having graduated from college and secured my first job. The cassette stayed in my car all summer. The mandolin became my favorite instrument.

My father and Mike Mills’ father were roommates in college, and when Mills’ father paid a visit to our house in 1992 I got to hear a sneak peak of Automatic for the People, their most successful album. I had to share R.E.M. with millions of other people worldwide after that, and curiously, it was about that time that my interest dwindled. 1994’s Monster was loud and tuneless – perhaps it was pressure from Warner Brothers to go grunge. After that, it was all downhill.

So an old friend has died. But I don’t wonder what other marvels they had up their sleeve; instead, I appreciate what they did give me, and I can look back fondly when we were all young, rebellious and a little foolish. Here’s the group as I first discovered them. Enjoy them as I did.