How to Organize Your mp3s 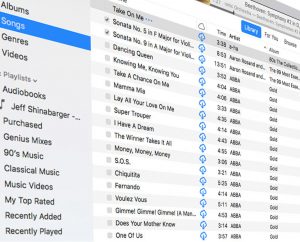 My house is a mess and I can’t remember where I put my sunglasses, but my mp3 collection is close to immaculate.

Call it an attempt to bring order to some part of my life. But I’ve spent years fine-tuning my mp3 tags, and I think I have it down to a science.

Each mp3 file has metadata associated with it — that is, information about the file. These are called ID3 tags, and they describe each song using such fields as:

There are other fields such as disc number (for multi-disc sets), composer, conductor, album artist and a comments field, but more about that later. The key is to fill in as much of these as possible for each mp3. Luckily, there are tools that can help you with this, many times as a batch so you don’t have to do it individually. Read more about these tools. I use MusicBee, which doubles as a great mp3 player if iTunes is not your thing. 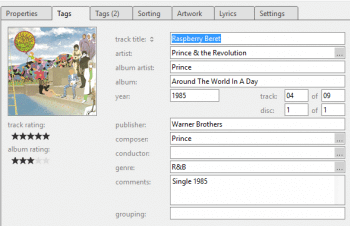 Some mp3 tags such as track number and artist will be easy to fix. Others, such as missing song names, will be more difficult to retrieve. You may have to listen to the lyrics of the song and Google it to find out what the name of the song is. One good resource for finding missing song and album information is allmusic.com, which lists entire discographies for almost any artist who has released an album. Wikipedia is also a good resource; most popular groups have a discography entry that lists what songs are on each album and what year they were released.

While you’re at it, go ahead and add things such as disc number (90% of your albums will be only 1 disc, so it’s disc 1 of 1). Add Album Artist; this is important when you want to listen to one artist who may have been in several bands. For example, I’ve labeled all Tom Petty & the Heartbreakers albums with the album artist “Tom Petty,” since he had several solo albums as well. This way I can create a playlist of all Tom Petty songs, regardless of whether he was solo or with the Heartbreakers. (Most of the time the album artist will be the same as the artist.)

About that Genre Tag… 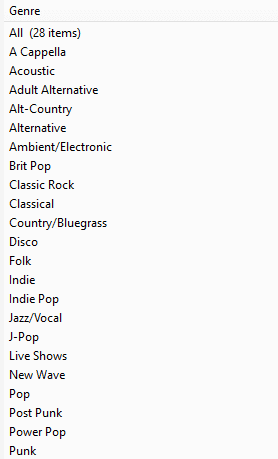 Ah, genres. Everyone has his or her own opinion. One person’s definition of rock may be alternative to another. Add to the fact that there are multiple subgenres — surf punk, dream pop, baroque pop, indie rock, post-punk, shoegaze — and you start to realize what a mess this could become.

Don’t worry too much about the genre tag, unless you want to create playlists of your favorite genre of music. I have 28 different genre tags, and have even made up my own (such as “Pure Pop” — Beatlesque pop that is too mellow for power pop). I’ve combined country and bluegrass, jazz and vocals, and ambient and electronic because I don’t have a lot of that music.

But what about R.E.M.? Are they alternative or rock, or adult alternative? Is the Cure goth or post-punk? Again, it depends on your taste in music. Just be sure you consistently tag these and don’t let them get away from you. You don’t want 60 different genres . . . or maybe you do.

This advice is not for the faint of heart, but trust me: It’s the best thing you can do for your mp3 collection. Go through every song and rate it 1 to 5 stars. This may take days, weeks or even months depending on the size of your collection. Some will be easy; for instance, you already know to give the Beatles’ “Yesterday” five stars; so go through your collection once and assign a rating to all songs you know. For most songs, though, you’re going to have to listen to them to assign a star rating. Here’s my criteria:

Use the half-star rating if you’re not sure which group to put it in. (Yes, I have some songs that are one-half star.)

There are several advantages to this, one of which I’ll talk about later. The immediate benefit, though, is that it weeds out many songs and albums which have been in your collection for many years, and you haven’t listened to them, but after rating them, you may realize that they suck and don’t belong in your collection anymore. Click. Delete. You’ve just streamlined your collection and saved disk space.

If you really want to get fancy, make sure all of your mp3s have album art associated with it. If you’ve ripped your own CDs, it should populate this for you already. But if you have bootlegs and rare albums, you may not have any artwork associated with it. Use Google or allmusic.com to find the album art, and simply paste the art into the associated field. It’ll look so much cooler when you’re playing your music.

One of the best things about the mp3 era is that you don’t have to buy an entire album just to listen to one song that you like. Granted, if the song is a single, you can always buy the single, but sometimes you’ll hear an album cut that’s phenomenal, but the rest of the album stinks. That’s okay, just buy the mp3 of that one song.

But you’ll see that with single songs, you’ll run into continuity and QA problems. What track number is “Walking on Sunshine” if you just bought the single? What album should it be from? What artwork do I use with it?

There are several ways to address this problem:

You might say, what’s the big deal? Why not just use bullet number one for everything? I’m a completist, and I like having all my tags describing the song in as much detail as possible — and have it accessible quickly if I’m looking for it. There’s a method to my madness, as you’ll soon see.

What about soundtracks? Classical music? Here’s what I do:

(If you want to get really fancy, put the names of the people who wrote all the songs in your library — e.g., insert “Jeff Barry, Ellie Greenwich, and Phil Spector” for the composers of “Be My Baby,” even though the Ronettes performed it. Why? You’ll see…)

All of your work comes up to this. Playlists are exactly what they sound like; lists of songs that you can create and group together. You can manually create them — for instance, I created my own Joshua Tree double album by creating a playlist of album tracks and B-sides. You can also create the digital equivalent of mixtapes by choosing your favorite songs, or songs for that special someone, and adding them to a playlist.

But the real magic is in auto playlists, or as iTunes calls them, smart playlists. 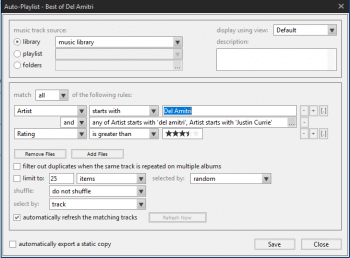 Here’s where it gets cool. Remember all that work you did rating every song? Now you can create auto playlists based on those ratings. Want to hear your all-time favorite songs? Create an auto playlist where Rating = five stars. Haven’t finished rating all of them? Rating = no stars gives you a playlist of all songs that haven’t been rated. Not sure whether to keep a song? Rating = one star. Listen to them and purge as needed.

If your auto playlist is too big, you can limit the number of songs, or select them randomly. You can have the playlist play in order or shuffle.

Other ideas for auto playlists

Play with the auto-playlist feature. You can do pretty much anything with it. Happy listening!