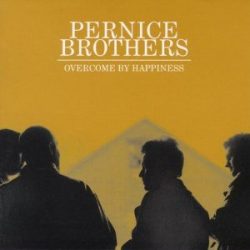 I know it’s bad to form first impressions. Sometimes you can be totally wrong about someone, analyzing a person based on their looks or the way they talk, and then realize that he or she is completely different — like Joe Pernice of the Pernice Brothers.

Here is a guy whose solo album, called Big Tobacco, featured such tracks as “Pipe Bomb,” “Bum Leg” and “Prince Valium.” His previous band was called the Scud Mountain Boys, which featured the songs “In a Ditch”, “Van Drunk”, “Liquor Store” and “Cigarette Sandwich.”

See? You’re already getting the picture I was forming in my head when I went to sample his first CD with his new project, the Pernice Brothers: Waylon Jennings meets Joy Division. Ick.

So much for first impressions. Despite his song titles and sometimes morbid lyrics, the Massachusetts native writes beautiful melodic songs that can tug at your heartstrings and bring a tear to your eye with every listen. (Even “In a Ditch” is beautiful, if you don’t pay attention to the words.)

Not Overcome by Happiness

Overcome by Happiness, the first album by the Pernice Brothers, is also deceptive; despite the title, it seems as if Joe Pernice is quite depressed, with songs titled “Crestfallen” and “Sick of You.” His lyrics border on despondent: “Dimmest Star” has Joe pleading, “Don’t ever leave until I make up my mind / Don’t ever leave my troubled life.” “Chicken Wire” is about a woman who commits suicide by keeping her car running in the garage. Not a pretty visual, is it?

Even the title song is depressing, its title taken out of context from the rest of the lyrics:

These lyrics are sung to music that brings to mind Burt Bacharach, complete with horns and strings accompanying an acoustic guitar and brushed snare drum. You keep expecting Dionne Warwick’s voice to sing over the lush, melodramatic orchestration. Instead, Joe’s raspy vocals emerge again, and you suddenly appreciate a tough guy writing such sweet music.

You keep waiting for the death metal to kick in, the discordant feedback, or shouting of obscenities. Instead, he almost whispers, struggling to reach the high notes that his clever songwriting has laid before him. After a few listens, your inhibitions fade, and you turn up the volume not to dance and thrash about, but to feel the intimacy of each song even more.

I keep buying Joe Pernice’s albums, one by one, savoring each song like a good cup of coffee, listening to it maybe once a week to prevent burnout. If I eventually grow tired of it, I buy another one. (I got three for Christmas one year and listened to them as little as possible at first, keeping them new for as long as I could.)

Joe Pernice has quite a few outlets for his creativity: Two albums by the now-defunct Scud Mountain Boys, five studio albums, one live album and an EP with the Pernice Brothers, one by yet another side project (Chappaquiddick Skyline), and the aforementioned solo album. He’s written one non-fiction book, one book of poetry and is working on a novel.

Joe Pernice has a gift. I have yet to be disappointed by any of his music, and that still surprises me.