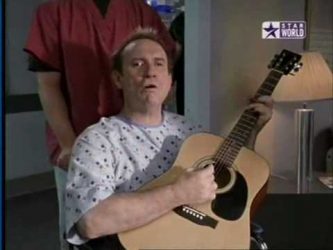 Men at Work were the quintessential band of the 80s; they burst on the scene with 1982’s Business as Usual, riding on the strength of the major hits “Who Can It Be Now?” and “Down Under.” Soon everyone knew what vegemite was.

But no longer could musical artists rest on their laurels; with a new band popping up every minute, Colin Hay and company were pressed to record and release another album. Cargo debuted in 1983, and although it spawned two Top 10 hits, “Overkill” and “It’s a Mistake,” it failed to capture the Zeitgeist as its predecessor, and Men at Work quietly yielded the stage to Duran Duran and Culture Club.

I remember thinking at the time that “Overkill” was a catchy, upbeat number, and its neurotic message was similar to its paranoid predecessor, “Who Can it Be Now?” But it seemed a bit too lightweight and quirky, and, like the group itself, the song retreated to the deep recesses of my brain. I heard it maybe twice over the next 19 years.

I was watching an episode in 2002 in which Braff’s character, J.D., and his friend Turk were grabbing lattes from a coffee stand before heading to work at the hospital – one day after a heated argument among the employees.

Suddenly, there was Colin Hay in the background, a bit fatter and balder, playing a troubadour with an acoustic guitar singing “Overkill.” Hay followed J.D. around at the hospital as J.D. and company tried to deal with each other during a particularly stressful day.

The song immediately took on new meaning – Hay’s stripped-down version lent some newfound sadness and frustration to the otherwise dated hit. Mind you, it was still quirky – Hay posed as a patient throughout, standing in a closet with J.D. as J.D. hid from his attending physician and, at one point, serenading him as a corpse in the morgue.

But as the cast struggled with their problems throughout the day, the words, “I can’t get to sleep, I think about the implications of diving in too deep” suddenly made sense. It wasn’t just another weird Men at Work hit; it was a bittersweet ballad exposing our own anxieties and vulnerabilities.

Colin Hay has proven that he is no flash in the pan; he has released several solo albums, and his song “I Just Don’t Think I’ll Ever Get Over You” was the highlight of the soundtrack to Braff’s movie, “Garden State.” And Hay’s solo acoustic cover of his own hit is now the most-played song on my iPod.