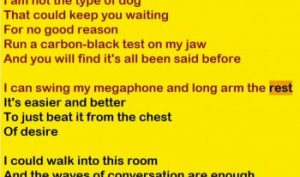 One day, around the age of 11, I was playing around on the piano and found a chord progression that was simply mesmerizing. I played it over and over, convinced that I had found some magic formula.

Of course, I never did anything with it, and later I found other songs with the exact same chord progression: Chicago’s “Saturday in the Park,” Lenny Kravitz’s “Let Love Rule” and the Beatles’ “You Won’t See Me.”

In those songs, the fifth note of the chord (the highest note) gradually descends chromatically until it rests on the third (So if you’re in the key of C, the phrase goes G – F# – F-natural – E.).

“Let Love Rule” mimics my composition exactly, with the same bass note being played throughout the phrase. Where’s my cut, Lenny?

In this chord progression, once the note starts to descend, it automatically creates tension, for a half step sounds dissonant when compared with the other two notes of a major chord. It’s almost the right note, but not quite. When the note slides to the fourth interval (the F-natural in the above example), it then creates what is called a suspended note; it automatically wants to jump down to the third, and when it does, the dissonance and tension are alleviated. You almost breathe a sigh of relief at the end of the phrase.

R.E.M. makes a change with Green

R.E.M. is not usually known for its melodic phrasing; while their early albums had some beautiful songs, it was usually due to the jangly, Byrds-like textures of Peter Buck’s lead guitar. But on 1989’s Green, some things changed:

Buried on Side 2 of Green is “Hairshirt,” an extremely simple song that takes my chromatic phrase and uses the mandolin to interpret it. You have to listen closely to hear the descending notes, but they are there. The droning bass is present as well, and an organ adds the slightest texture to the accompaniment.

There is no chorus, but the bridge features more dissonance – a minor key, or even perhaps a diminished chord, I can’t tell. Eventually, though, it resolves into the same phrasing, which is a welcome relief. Stipe’s vocals are emotional – again something that he doesn’t show often – and they soar over the simplistic arrangement. “It’s a beautiful life,” he sings, and together with the music, his statement is convincing.

“Hairshirt” is little known even among R.E.M. fans, but it remains one of my all-time favorite R.E.M. songs (see “At My Most Beautiful” for another example). Enjoy.