Playing Piano in the Dark 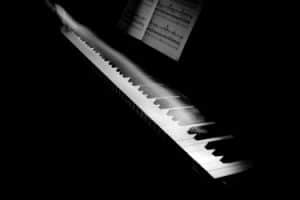 My college years were tough. They tested me, beat me up, made me question everything about myself – who I was, whom I was to become, why I deserved to be there. Which is what college is supposed to do, I guess.

But my final two years of college – which was also my first two away from home – seemed particularly brutal. It was a new environment (I had transferred), I had few friends, and I was being challenged academically like I never had been before.  To say it caused a great deal of stress would be stating the obvious. I reached the breaking point a few times.

Some run to let out stress. Some lift weights, others drink or get a massage. I played piano.

I took piano lessons for about seven years and hated most of it – practicing nonstop scales and arpeggios, playing songs I had never heard of, trying to get my useless left hand to do something totally different from the right hand.  But then I discovered something that changed the way I played:  the sheet music to popular songs had guitar chords written above those seemingly impossible piano parts.

Those chords worked for piano as well.

Pay no attention to the notes! The guitar chord says G7, so play a G7 chord on the piano with a G in the bass! C/E? C chord with an E in the bass! Pick your way through a melody, and you had something that resembled the song pretty closely. Soon I was playing pretty much anything I wanted, and I played constantly. I began to find relationships between certain chords. I could predict what a certain chord would sound like next when learning how to play a piece. And much to the disappointment of my parents, I played whenever they left the house – I didn’t want them listening because this was my music, my discovery, you see. I played so much I could find the notes with my eyes closed.

When I found myself at my wit’s end in college – usually around 2 a.m. – I found a piano. I didn’t major in music (Where’s the money in that?), so I usually had to find an unlocked door into the music building, search for the practice rooms, and settle in on one of the piano benches. In the dark, of course. (Remember, my music. No one else can hear it.)

And then for the next hour I would play.

I played Lone Justice’s “Dixie Storms,” the soft, high notes bringing serenity to my ears. I played “Pity the Child” from the musical Chess, pounding away on the keys and bringing out the anger the character felt at his lost childhood. I reveled in the simplicity of “Bad” by U2, feeling euphoric during the musical climaxes and then settling into a zen-like state as the music eased back into the verses.

I had a whole repertoire, of course. Hell, I’m not sure if any of it even sounded good. But it was the cathartic, mood-swinging songs that usually helped me the most. I wrenched every bit of emotion from each note I played, wanting to hear the desperation in one chord, fighting through anger into joy, and then softening back into peacefulness with notes so soft I could barely coax it out from the piano. Still hearing the notes echoing out of the instrument, I always listened for other people coming but never heard anyone except for an occasional piano student who was too busy or too scared to see who else was playing.

After the hour, emotionally and physically exhausted, I made the trek back to my dorm room, knowing that I had purged whatever demons had been tormenting me that day.

I still do this 20 years later. The demons aren’t as apparent, and I can’t play at 2 a.m. anymore for fear of waking the kids. But it’s still my therapy of choice. And for me, at least, it’s beautiful to hear.