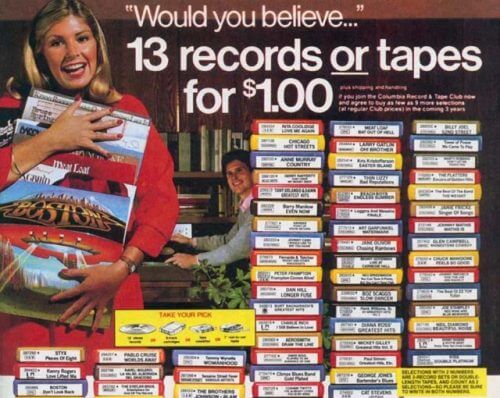 Columbia House, the popular mail-order record club that boasted four, or eight, or 12, or even 13 albums for a paltry sum ranging from a penny to a dollar, is finally going belly up. I’m surprised it lasted this long; perhaps it’s just my lack of reading magazines and finding its multi-page spread of albums, but I didn’t even know it still existed.

The “Spotify of the 80s,” as the Verge put it, declared bankruptcy this week after declining sales over the past 19 years. Simply put, people aren’t buying CDs, much less albums, cassettes or 8-tracks anymore.

I never subscribed to the service – perhaps because of the rumors that they’d start sending you albums unsolicited, then charge you for all of them, or that each album that you had to buy after the initial sale cost $20 each. $20! At any rate, all I could do was fill out the numbers of each album I wanted. I spent hours pouring through the lists, paring my selections down to 30, then 20, then the 12 must-haves. I couldn’t imagine getting 12 albums at once. I was lucky to get 2 or 3 per year. I needed to join this club.

Why did Columbia House die? Albums as a complete concept are slowly dying; consumers can now buy their favorite track from one album and ignore any hard work the artist undertook to make the album whole and unified. People can now get free music, too, through such services as Spotify and Soundcloud.

What’s next for music now that we’re choosing each track like an item from a fast-food restaurant? Maybe the album will return as a force one day, but for now, most of us prefer listening to an Indigo Girls song after Kajagoogoo‘s “Too Shy.” That’s what the consumer wants, and that’s what they’ll get for now.