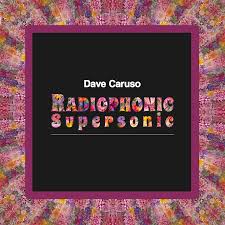 Caruso’s latest release, Radiophonic Supersonic, continues to showcase his songwriting talents. The melodies seem to come easy to him, and they flow naturally from his head as if he’s taking dictation. Take, for instance, the opening track, “Little Miss Sunshine.” The song is as bright as its title as it goes through several key changes to reach stratospheric levels of happiness.

But with Caruso, you can’t rely on the mood of the song to guess what it’s about. On the equally peppy “The Drop,” he is “staying happy in the honeymoon phase” but reminds us later that “the falling part is easy but the drop is long.” On “Tuesday’s Gone,” he hides the sad lyrics behind a wonderful a capella chorus that makes the entire song bittersweet.

Caruso shows a fascinating ability to create memorable melodies to unforgettable chord progressions, and the result is a set of songs that stay embedded in your brain hours after you hear them. In the keyboard-heavy “Heaven Minus Love,” he adds a trumpet solo to the last chorus as he likens a failed relationship to “stones planted in the earth, dreams buried in the weeds.”

And he shows us his sense of humor on “Throwing Out My Baby with the Bassinet,” complaining about living with a partner who is “leaving her unmentionables hanging everywhere.” The song has an old jaunty skiffle sound reminiscent of the pre-Hamburg Quarrymen (otherwise known as the Beatles), and clocks in at just over two minutes.

And with that, the CD ends. It’s a perfect coda to an exceptional album that leaves you wanting more. That’s what all artists are supposed to, isn’t it?