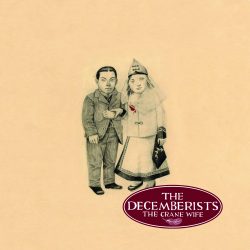 I was shocked when I heard the opening chords to the Decemberists’ 2006 release, The Crane Wife. (The song is called “The Crane Wife 3,” while “The Crane Wife 1 & 2” finish the album, for some strange reason. Oh yeah – They’re quirky!) A single acoustic guitar played, strong and subdued at the same time. Even Colin Meloy’s voice entering over the guitar didn’t bother me too much.

After years of enduring this overrated group, I had finally found a Decemberists song I could put on my iPod.

The Crane Wife was the Decemberists’ major label debut, and the bizarre theatrics of Picaresque are subdued somewhat – perhaps to reach a wider audience and please the record executives at Capitol. I can just imagine the conversation.

Record Exec: So, Meloy, you got a single for me? I need something bouncy, something emo for the kids.

Meloy (reluctantly): Well, I have a really good song for the opening cut. (Perks up) I also have this 12-minute medley that’s a retelling of Shakespeare’s The Temp –

Record Exec: Yeah, yeah, whatever. Hey, can you sound like James Blunt?

A thesaurus full of lyrics

The aforementioned medley is excruciating as Meloy goes back into quirk mode with the series of songs that, while describing a kidnapping and murder by drowning, mention the words “curlews,” “barb,” “arabesques,” “jetty,” “cormorants,” “parallax,” and “sable.” I didn’t like the songs, but my vocabulary grew by leaps and bounds.

Luckily, enduring the medley (titled “The Island: Come and See / The Landlord’s Daughter / You’ll Not Feel the Drowning”, of course) has its rewards. I finally experience the plain but pleasant voice of Jenny Conlee on “Yankee Bayonet (I Will Be Home Then),” and I wonder why she doesn’t sing more. And then … there it is again! Another iPod worthy track! “O Valencia!”, which has been featured in several commercials, opens with a pounding drum and guitar riff reminiscent of R.E.M.’s “Seven Chinese Brothers” (Lawsuit! Lawsuit!) and is downright poppy – until you listen to the lyrics, in which two gangs battle, causing the shooting death of the narrator’s girlfriend. (Cue Debbie Downer music)

The Crane Wife is – dare I say it? – enjoyable in many places, and it even seems as if Meloy’s over-enunciating and reedy tone are less annoying. But while the lyrics once again read like poetry, I’m not sure they really should be set to music. With the above example, it’s almost as if Meloy, et al are trying to impress us with their vocabulary, or look down their noses at us from the heights of the intellectual elite.

As I reach the concluding song(s), the 11-minute “The Crane Wife 1 & 2” (yes, another medley), I continue to hear bits and pieces that are really, really good. But then – wait a minute, did he just say “dirigible”? Is that the first time that’s ever happened in a song? Sometimes, I just wish the Decemberists would stop with the airs and just rawk.