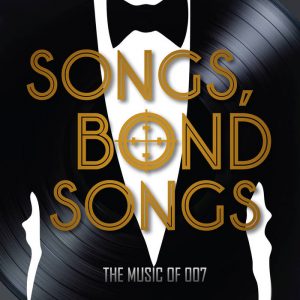 This may come as a shock, but I’ve never been a fan of James Bond films. They always have confusing plots, and I get bored halfway through.

But the music is always fantastic. From the opening lines of John Barry’s James Bond theme, you get a sense of the romance, swagger, intrigue and mystery of 007 (even if I didn’t get it in the movies).  Over the years, movie producers used a wide variety of artists to pen and perform James Bond movie themes, from the crooning of Shirley Bassey and Sheena Easton to pop superstars such as Wings and Duran Duran to the alternative edge of Chris Cornell and Jack White.

Andrew Curry, who has two successful compilations under his belt (Drink a Toast to Innocence and Here Comes the Reign Again) has again produced a gem of covers by alternative pop artists. But unlike the other two compilations, in which I knew most of the songs covered, there were several James Bond themes that I had never heard before. This gave me a chance to compare which version I liked better, no matter which one was the original, genuine version.

Of course, there are classics: “Live and Let Die” and “A View to a Kill” are almost impossible to improve upon. So I decided to compare each song with its cover and determine what changed in the interpretation and whether it improves upon or at least preserves the integrity of the song.

So there you have it; Andrew Curry has done it again with Songs, Bond Songs. He’s created a delightful mix of songs that brings back memories but gives them their own modern touch. He also blows the trumpet of melodic pop music, and for that, he should be applauded. Here’s hoping there’s a rush of Bond nostalgia and a rush for this record. And I can’t wait for his next project.