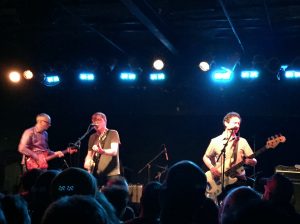 There are very few bands I’ll shell out air fare for to go see.

A Teenage Fanclub concert is one of those times, and since they weren’t making their way south as part of their quick tour of the United States, I shelled out the money to trudge north to see them perform.

I was not disappointed.

In an interview with the Chicago Tribune, frontman and rhythm guitarist Norman Blake implied that fans would hear a more raucous Teenage Fanclub, more in line with their earlier material than their mellow, harmony-laden later years, including their latest record, Here, which they were touring in support of.

And seeing them set up – these 50-something, gray-haired musicians who have been together ever since their debut, A Catholic Education, in 1990 – you wondered if they were indeed going to turn back the clock 26 years.

No worries. From the opening number – “Start Again” from their Byrds-sounding Songs From Northern Britain – lead guitarist Raymond McGinley ripped into a guitar solo that made my chest cavity vibrate. And I regretted not bringing earplugs.

The Scottish band plowed through a set that included many of their more recognizable songs – many of which start off their 11 studio albums – and included a balanced mix of songs from each of the three main songwriters – Blake, McGinley and bassist Gerard Love.

Still enjoying it after all these years

Blake, clearly the most comfortable with the crowd, smiled and shook his head as if he couldn’t believe he was still doing this after all these years. McGinley, in a red-and-white striped button-down shirt, was all business, focusing on his guitar playing except while he sang his songs. Love preferred to stay out of the spotlight – literally hiding in the shadows – until it was his turn to sing.

The only gripe: the vocals were mixed too low, which didn’t allow for Teenage Fanclub’s signature harmonies to stand out. It’s hard to recreate such tight harmonies in concert, and at times you didn’t get the full effect of their vocal talents.

It’s a testament to the talent of this band – and their friendship – that they have remained together all these years. Granted, it took six years to get Here out of them, with members participating in a few side projects, but the album is just as consistent as their earlier material, albeit a little more laid back and mature.

The band came out for only one encore, to the disappointment of the packed house, but continued to dig into their back catalog with “Starsign” and “Everything Flows.”

Time be damned. Teenage Fanclub turned back the clock Friday night and proved that they can still rock. This middle-ager would have been fine with an acoustic set. At least my ears would have been – this was the first concert in years where I woke up with my ears still ringing.