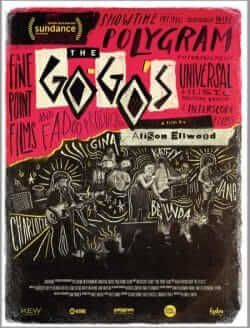 VH1’s “Behind The Music” was a wonderful show which told all the never-heard-before gossip about musical acts. The plot was pretty much the same for every show:

It was a wonderful formula and riveting to watch all the salacious details come out about the act. I watched almost every episode (I skipped Dr. Dre, Nas and Nelly) at least once.

Now in 2020, the Go-Go’s have a documentary on Showtime called, appropriately, “The Go-Go’s.” And although it follows the exact same format as “Behind The Music,” it’s 30 minutes longer and therefore can go into much more detail.

For instance, we see the band’s formation with a different drummer and bass guitarist, only to be replaced before they hit it big. We see the usually stylish Belinda Carlisle wearing a garbage bag during her punk rock phase. And we see one of the first all-girl bands to form out of the punk movement and emerge with a No. 1 album.

The fascinating parts of the documentary center on Charlotte Caffey’s love of songwriting and her battle with addiction. We hear how she wrote “We Got the Beat” several years before it became a hit. We also get to hear how Jane Wiedlin wrote “Our Lips Are Sealed” and hear a previously unheard demo of the song.

Ultimately, the Go-Go’s became a hit by softening their sound — at one point during the recording of Beauty and the Beat,  the producer actually told them to “slow it down” — and by acting sexier than they did during their previous phase. The video for “Our Lips Are Sealed” featured them all dolled up, riding in a convertible, and ended with them all wet, frolicking in a fountain. It made them stars, but at a cost.

After their second album, Vacation, Caffey had writer’s block, Wiedlin fought over songwriting credits, and drummer Gina Schock and bassist Kathy Valentine were the victims when the Carlisle and Caffey decided to break up the group shortly after only their third album.

It was a roller coaster ride for the Go-Go’s — exciting, up and down, and far too short. So is the documentary, despite its similarities to Behind The Music. Curiously, BTM had their own episode on the Go-Go’s, which they hated because of all the reports of backstabbing. But if anything, the new documentary shows that, despite the predictable “reunion,” there are still hard feelings lingering.