‘Underneath the Tree’, Kelly Clarkson 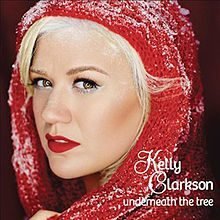 Kelly Clarkson is venturing into dangerous territory with her Christmas hit “Underneath the Tree”. It’s just different enough from Mariah Carey’s “All I Want for Christmas is You” to avoid a lawsuit, but the two are so similar, you can hear the conversation between Clarkson and her songwriting partner Greg Kurstin:

Clarkson: “Mariah Carey has a Christmas classic. Why don’t I have one?”

Kurstin: “Well, let’s write you one. What do you like?”

Clarkson: “‘All I Want for Christmas is You.'”

Kurstin: “Well, let’s rewrite that. We can tweak it enough to keep Carey’s lawyers off of us.”

Clarkson’s song clocks in at 3:49 at 160 beats per minute; Carey’s is 4:01 at 150 BPM. They’re in different keys, but they both begin with a music-box intro before launching into a Phil-Spector-Wall-of-Sound production, complete with sleigh bells and a girl-group Motown feel. The first two chords are the same, then they differ. But the comparison is there. There’s even a YouTube mashup of the two songs, although done in appreciation more than accusation.

That being said, imitation is the sincerest form of flattery. The Monkees copied the Beatles in every aspect, down to their moptops, but the result was still yummy pop music that had us all humming their tunes. It’s the same with Clarkson’s “Underneath the Tree”: You complain that it’s the same song as Carey’s classic (and let’s face it: it’s one of the few modern Christmas classics to come around in a while), but you still tap your feet and sing along, and it stays with you.

Damn you, Kelly Clarkson. You got us.