Riding Around with Robby 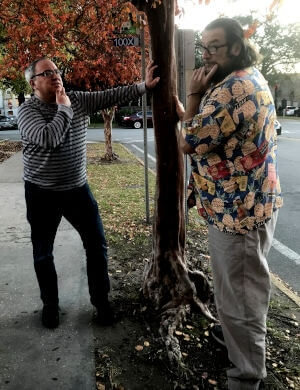 Robby & I in our famous JC Penney pose.

I first met Robby Richardson at a planetarium show the summer before seventh grade. I thought we’d hit it off — we were both interested in astronomy, both liked Star Wars — but after school began, the bullies started in on him, and like any other middle schooler afraid of being on the wrong side of the playground, I joined in, too. we were merciless, and he transferred to another school the next year. I didn’t think much about him until our junior year, when we roomed together at Camp Glisson, a United Methodist camp in Dahlonega.

I don’t know what happened that summer, but Robby and I formed a bond that would never be broken — strained sometimes, but never broken. We were inseparable. We finished each other’s sentences. We’d recite things verbatim from David Letterman shows, make up our own characters and perform skits — it was like watching two people perform a Vaudeville show.

But where Robby and I really melded was music. We were both obsessed with it and had it booming from speakers wherever we went and wherever we were (yes, through ghetto blasters). Living in Appalachia, our only source of new music was a few shelves at Video Unlimited, a video store in nearby Blairsville. We’d go there after school every Tuesday to see what the latest releases were, and spent our allowance not on video games but on cassettes.

We’d also drive to Gainesville, some 90 minutes away, if only to get out of our small town and find a mall where there was a real record store. After we took our SATs, we took a trip there; I bought Simple Minds’ Once Upon a Time (which had “Alive and Kicking” on it), and he, in a daring mood, bought So Red the Rose by Duran Duran offshoots Arcadia. He always thought I got the best end of the deal, but as I sit here listening to Arcadia, I’m not so sure. They both sound pretty dated.

On another trip to Gainesville, we decided to go to the movies. I was listening to Prince’s new LP Parade at the time and wanted to see his new movie, Under the Cherry Moon. He wanted to see Kurt Russell’s Big Trouble in Little China. He dropped me off at the cinema where Prince’s movie was playing, and I watched the whole disaster unfold before me alone in an empty theater. Robby enjoyed the hell out of his movie and still talked about scenes from it years later. Robby 1, Peter 0.

Our first obsession was U2. I bought their live EP Under a Blood Red Sky with him on a trip to Six Flags. We celebrated graduation with a toga party outside his house, square dancing to “Sunday Bloody Sunday” blasting from his room. He heard “With or Without You” before I did and described it in perfect detail to me. When I finally heard it come on the radio, it was like hearing it for the second time.

We both rode the New Wave craze to its full heights. We dared to wear skinny ties and blazers to school, not caring who hated it. He went so far as to wear fedoras. We listened to music that no one else would listen to — the Cure, David Bowie and R.E.M.

Ah yes, R.E.M. Who else but Robby would introduce me to the group? As we cruised around town in his Aerostar one night, he popped in Lifes Rich Pageant, and the energy, tightness and musicality floored me. In just a few months we were dancing around the bottom of Sharp Hall at Young Harris College, flailing our arms and jumping around to “It’s the End of the World As We Know It (And I Feel Fine),” sweating and enjoying life to its fullest.

I heard yesterday that Robby died. It was like a part of my past had been ripped from me, leaving a hole in my soul and in my memories. We had seen each other only twice in the past 10 years, but I was fortunate enough to have stopped by to have lunch with him and his wife in Savannah a few months ago.

The old memories came hurtling through my mind as we ate and talked — tossing bookends at each other between the stacks at the college library, where we both worked; taking everything out of the office of his father, the librarian, and setting it up exactly as it was right in the middle of the library; putting busts of Abraham Lincoln in the elevator; driving around the college campus at 2 a.m. listening to music and talking about life.

Our music didn’t always sync. I never understood his buying a Screaming Blue Messiahs cassette, and he never understood my jazz phase. But music brought us together, and to me there is no tighter bond than music. For the first time in several years, I felt truly alone. I yearned to hear the music again, to celebrate life with him and know that somebody understood me. Robby did — he always did. Everybody thought he was like a big teddy bear, imposing but possessing a gentle, humorous side that would charm any person. And he did. I’ve never known anyone more loved and appreciated.

As we grew older, I became more serious, more detached, more anxious and stressed. He may have in his own way as well, but he never showed it. I laughed at his hijinks on Facebook and his obsession with pirates, Jimmy Buffet and Hawaiian shirts, and admired his overall attitude toward life as well as his love for his wife and his two kids. And I longed for the days of togas, flying bookends and cassette tapes.

2 thoughts on “Riding Around with Robby”