On ‘Shake It Off’ and ‘All About That Bass” 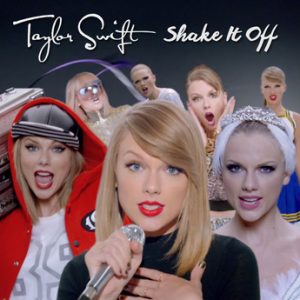 Taylor Swift’s “Shake It Off” and Meghan Trainor’s “All About That Bass” will probably be close to the top of the year-end Top 40 charts; together the singles have sold more than 6.5 million copies, according to Wikipedia, and that number will only get higher every time a teen or tween downloads another mp3 of the songs.

A Top 40 song must be pretty popular to get my attention, and these two have done so for two reasons:

Swift’s “Shake It Off” revolves around a hyperactive drumbeat and baritone saxophone, sounding almost like a high-school band. Swift sings over this accompaniment, and it’s clear that this isn’t one of her songwriting-by-numbers tunes, for it sounds nothing like her previous work (she’s listed as “co-writer”; we’ll find out why later.),  This is pure bubblegum, but it’s satisfying, and the hook is just that – a simple phrase that stays in your brain.

It’s so addictive, in fact, that you don’t realize that Swift’s pulling another Swiftie – boo-hooing about the media and all the “haters” who won’t let her get away with dating everyone in sight and then writing songs about them after she breaks up with them. It’s clear that Swift is still writing her tell-all lyrics and someone else has put some adrenaline into her formulaic music.

But wait, she throws us a curve. In case you’re not listening to her extremely personal lyrics, she makes you listen by stopping the music and “rapping”, I guess you’d call it, bemoaning “the liars and the dirty, dirty cheats of the world.” Poor Taylor.

Dig down deeper in the lyrics that subliminally went into your head during the catchy parts of the song and you’ll hear even more complaining:

No, it’s the truth. Taylor. You can’t make them stay, and your therapy/songwriting to either attempt to deal with it sells millions, for some reason.

‘All About that Bass’ 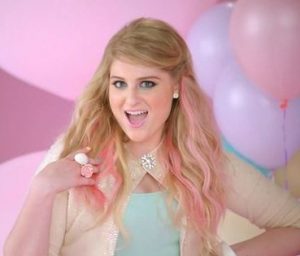 Trainor’s “All About that Bass” is less elegant and even more annoying, with the 20-year-old sorority-girl look-alike trying to sound like a hip-hop queen in the most grating chorus of the year. The only saving grace are the Amy-Winehouse-like verses which hearken back to the 1960s, with just a touch of Caribbean flair. It’s a brief, pleasant sing-along moment between the putrid choruses.

Meghan Trainor tries to justify her talk of shit and skinny bitches and junk in the trunk to say that it’s a positive song about self-image. Blah, blah. We know that doesn’t sell records. It’s all about that bass, ain’t it?