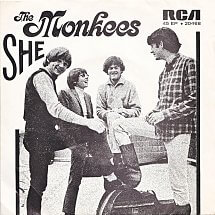 The Monkees are probably best known for their feel-good theme song to their short-lived TV show or their massive hit “Last Train to Clarkesville.” But when I think of the Monkees, I think of an album cut — a little-known song called “She.”

I was about 8 when I took the record from the sleeve of the More of the Monkees album cover and placed it on my parents’ massive stereo. The opening chords of The Monkees’ “She” squealed from the lo-fi speaker, and I wasn’t impressed at first. But then the group opened with three-part harmony, singing “Sheeeeeee….” and Micky Dolenz answering with “She told me that she loved me,” moving from a E chord to a D chord–very hard-sounding, angry, even primitive. They repeated it, and then something wonderful happened.

The chorus. That marvelous chorus. The third note of the chord modulated just a half-pitch up, then again before moving back down the scale and finally settling on the chord from which it started. Dolenz’s bitterness in the verses gave way to utter despair (“Why am I standing here / Missing her and wishing she were here?“). Because of these three notes, I wanted to cry.

An 8-year-old crying over a song. Of course, I still had no idea what a chromatic modulation was. I just felt the despair of the notes, sounding sad and beautiful at the same time. It was as if that one verse had flipped on my pop music gene, or a light had been turned on in my musical mind. I wanted to hear more. My heart yearned for it. (Never mind the sophomoric “Hey!” that followed later in the song. I tried to ignore that.)

I played that chorus over and over and never grew tired of it.

Later, I learned that a group of songwriters were behind almost the whole album. The Brill Building was home to a factory of songwriters penning hits for other people. They’d crank them out, and the latest starlet or girl group would belt them out onto a record. They were machines — wonderful talent such as Gerry Goffin, Carole King, Neil Diamond and Burt Bacharach. And on the Monkees’ album, their contributions were noteworthy: “(I’m Not Your) Stepping Stone,” “Look Out (Here Comes Tomorrow),” and “I’m a Believer” were all written by the Brill Building teams.

“She” was written by Tommy Boyce and Bobby Hart, another set who also wrote the two aforementioned smashes, “(Theme from) The Monkees” and “Last Train to Clarksville.” Without knowing it, my tastes were being set up for a pop explosion, the likes of which I am still trying to recover from.

The rest of The Monkees’ “She” isn’t much, but it took those three notes to turn me into a Monkees fan–and a student of pop music for life.