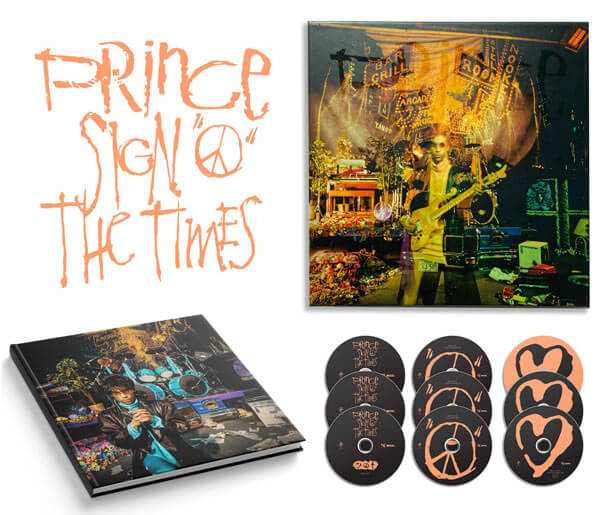 If Purple Rain was Prince’s Sergeant Pepper, then Sign O’ The Times was his White Album. A double album as well, it was full of ideas, eclectic, and like most double albums, incohesive. As history revealed itself, we found that SOTT was the culmination of not one, not two, not three, but four album configurations with two different names. One configuration was even a triple album, nixed by Warner Bros.

This is how Sign O’ The Times came to be — a compromise. Despite its political beginnings — firing his band, feuding with his record company — the conglomeration of songs sometimes works. And now Prince’s estate is holding the vault door open and letting dozens of unheard gems from this era escape into the public domain.

The result,  Sign O’ The Times – Super Deluxe Edition, doesn’t come cheap — the price for the box set is around $159.98, I opted for just the mp3s, so I paid $74.99 for 90 songs. Ninety. They include a live concert, which I tossed (I know, I know, but I generally hate live recordings, and this was no exception). That left me with 74 originals, remixes and unreleased material to sift through.

The size of the collection gives you an idea of what Prince had to deal with during this time. Parade, the music to his box-office flop Under the Cherry Moon, had just been released, he was composing songs for Jill Jones, Madhouse and Sheila E., and he still had dozens of songs to choose from to create his own album.

In previous posts, I’ve gone into detail what the tracklists for his failed albums, 1986’s Dream Factory and the triple album Crystal Ball, might have been. They were the last to include his famous group the Revolution.

We hear some of these tracks on the Sign O’ The Times Super Deluxe Version (That’s like double-secret probation)  — the psychedelic sounds of “Teacher Teacher,” the droning sitar that once graced “Strange Relationship,” and Wendy and Lisa’s warm, jazzy interludes “Visions” and “Colors.” “The Ballad of Dorothy Parker” sounds new with the saxophones and trumpets highlighting the low frequencies of the song.

The demos take a decidedly funky sound as he begins to disband the Revolution, replacing them with saxophonists, trumpet players and sometimes, himself. We hear in its entirety his failed collaboration with Miles Davis, “Can I Play With U?” and two versions of the bootleg track “Witness for the Prosecution,” which was supposed to be on Dream Factory. The second version, apparently performed solely by Prince, is electric-guitar-filled grunge that makes it sound menacing and cold.

We also finally get to hear two songs that were missing from most bootlegs of Dream Factory — “The Ball,” which was an early iteration of “Eye No” from the album Lovesexy, and “And That Says What?”, an adrenaline junkie’s dream that be-bops along at 150 mph. An early version of “Big Tall Wall” is poppier, faster and better than the plodding, percussion-heavy track that has circulated.

Most of the new material is disappointing, though; we can see why it stayed in the vault. However, one shining moment is “Soul Psychodelicide,” one of the funkiest, retro numbers he’s ever cooked up. We also get to hear a rare 1979 version of his hit “I Could Never Take the Place of Your Man,” which, like most of his early work, is sublime and almost perfect. It shows how he could take a seven-year-old song, modernize it and turn it into a Top 10 single.

The actual lineup of Sign O’ The Times gets a refresh, although my ears aren’t up to hearing the differences. We get endless 12-inch versions, single edits and dub versions of songs such as “Housequake.” We get four versions of “Hot Thing.” One, maybe two versions would have been fine.

We’re also missing the actual Sign O’ The Times movie as well, which should have been included given the price of this monstrosity. Instead, fans get a DVD containing an unreleased New Year’s Eve benefit concert at Paisley Park, which was Prince’s final performance of the Sign O’ The Times. But completists will be happy enough that they now have digitally enhanced, studio-quality versions of songs such as “All My Dreams,” “Train” and “In A Large Room With No Light” so they can finally piece together their best Dream Factory configuration.