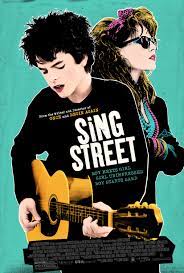 A pleasant surprise greeted me when I came home from work the other day. My daughter was watching Sing Street, a movie about a 15-year-old who starts a band to get the attention of, of course, a girl.

The movie, written, directed and produced by John Carney, is both innocent and realistic, as quiet 15-year-old Conor Lalor uses music both as an escape and as a way to get the girl he loves. The trouble is, he has only a guitar and no band. So he joins a bunch of outcasts at the Catholic school he gets transferred to, avoiding skinheads and sadistic priests, and forms a band.

We see seeds turn into songs as he and his songwriting mate, Edge look-alike Eamon, bounce ideas off each other, forming charming songs in the process. We see Conor take ideas from his older brother and mentor, borrowing his records and changing their image and influences from the latest release to come out. (The best part of the movie is when Conor’s brother tosses the Cure’s The Head on the Door and says, “This is happy/sad.”

The soundtrack rips into the joyous “In Between Days” as we see Conor, complete with a new Robert Smith hairstyle, walking to school with his bandmates as he tries to explain the new moody direction the band is taking. 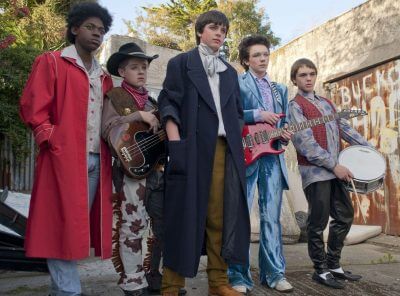 The Evolution of a Band

As the movie progresses, the songs get better and better. Gary Clark, formerly of 80s pop band Danny Wilson, does a great job of creating songs that sound just like the band’s current influence – just a little different. (Unfortunately, one of their influences is Daryl Hall & John Oates’ “Maneater.” Ick. Their song that’s based off “Maneater” is actually better than the original.). The “In Between Days” knock-off is priceless. Other songs have no influence – they’re just 80s-type pop-rockers that belong in an 80s movie, even though this was released in 2016.

“Sing Street” is one of those movies where you immediately want to go buy the soundtrack. The only thing missing is the gorgeous slowed-down piano version of a-ha’s “Take On Me,” which plays during a scene with Conor and his crush. It’s like a John Hughes movie – full of pop classics and unknown songs that you wish you could find more of. It’s also like reliving the 80s all over again – even if that means facing bullies and sadistic teachers.