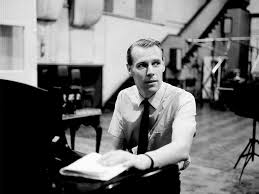 Sir George Martin wasn’t the fifth Beatle; in a way, he was the Beatles. Sure, John, Paul and George wrote most of the songs, and all four of the members sang and played most of the instruments, but Martin was the glue that brought all of the notes, chords, words and instruments together in a way that was not only pleasing, but innovative and exciting.

Always the snappy dresser, Martin looked out of place among the moptops, especially when the moptops’ hair turned even longer and the Fab Four grew facial hair. But he remained a gentleman throughout, always reminding the four that they had a job to do, even when the four were at each other’s throats.

Martin certainly didn’t intend to start with the world’s greatest rock ‘n’ roll group, or any rock ‘n’ roll group, for that matter. He attended the Guildhall School of Music and Drama, studying piano and oboe. He worked for the BBC’s classical music department, then joined EMI in 1950. Martin produced comedy and novelty records in the early 1950s, working with such stars as Peter Sellers and Spike Milligan.

Martin’s contributions to classic Beatles songs are not to be overlooked. He was the one who convinced McCartney to add a string quartet to “Yesterday” and “Eleanor Rigby.” For “Strawberry Fields Forever”, he and recording engineer Geoff Emerick turned two very different takes into a single master by using variable speeds and careful editing. He provided an unusual arrangement for strings on “I Am the Walrus.” On “In My Life”, he played a speeded-up baroque piano solo. He also worked with all the Beatles to create the cacophonous orchestral climax in “A Day in the Life,” and conducted the orchestra the day they recorded it.

These were just some of his contributions as arranger. He also produced all of the Beatles’ albums, leaving his mark on each one. Lennon, usually bitter toward all of his former colleagues, saved some of his nicer words toward Martin, saying, “George Martin made us what we were in the studio. He helped us develop a language to talk to other musicians.”

Martin helped produce the Beatles Anthology albums during the mid-1990s and was instrumental in being with Paul McCartney during the production of some of his better albums and singles, including “Live and Let Die,” Tug of War and Flaming Pie.