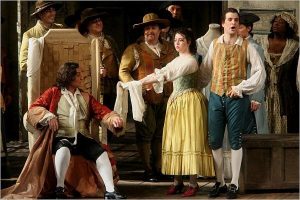 I knew what my favorite slow songs were, what my top Duran Duran songs of the 80s were, but something fit for a wedding? This was a toughie. I just didn’t want my bride walking down the aisle to “The Greatest Love of All.” (Sorry to those who chose this for their song.)

Enter Amadeus, a movie I’ve talked about countless times on this blog. Wolfgang Amadeus Mozart, in “The Marriage of Figaro,” writes a beautiful ending to one of his best operas (“Ah Tutti Contenti”): a scene in which a husband asks his wife to forgive him; the wife does, saying she is kinder than he, and they say that all will be content forever.

Never mind that the husband was asking for forgiveness for not knowing that his lover was his wife in disguise. That’s not really fitting for wedding music, I’ll admit. But the song is beautiful, and hell, it’s in Italian, so who would have known?

This is no aria with countless notes going up and down the scale, a recitative to make the most patient person sleepy. The man begins with a simple melody – so simple it could be a nursery rhyme – sung in a rich baritone. The melody starts on the fifth note of the scale, then it goes up a sixth to the third of the scale, then comes down the scale a bit; then it goes back to the fifth and then up a seventh, unable to resolve itself to the third until the last second.

The soprano’s part, more grounded, starts on the first note of the scale and is simply heavenly, jumping a fifth, again with such a simplicity you’d swear you had heard this on top 40 before. And when the two parts come together, it brings a tear to your eye.

Alas, it was a Catholic wedding, with its own grumpy wedding planner who had her own ideas for music. I didn’t get my way in much of the planning. Susan Hauser and Jeff Whatley (or Steven Hauser), you would have done well in these two roles. (Stop the video at about 2:25 – that’s all I wanted. After that it goes into full opera, which wouldn’t make for good wedding music.)