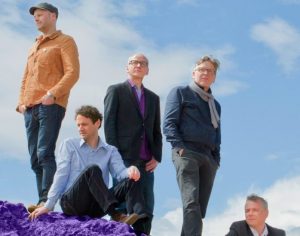 We enter the third phase of Teenage Fanclub’s career – one marked by a sudden departure of one of its main parts.

It took Teenage Fanclub five years to get around to recording the follow-up to Howdy!. The result was a stripped-down record that didn’t sound anything like their earlier releases, an album that was kept in line by new drummer Francis MacDonald, who had briefly been with the band at its inception. It was their third change at drums. The band had also hired Finlay MacDonald (no relation) to play keyboards to fit their evolving sound; he filled in the gaps on the minimalist record, especially on Raymond McGinley’s “Only With You.”

But there’s something missing on Man-Made; perhaps it’s the fuzzy guitars, but they had been largely absent since Thirteen. Melodically, it’s their weakest since Thirteen. But there are moments, especially when the three come together to sing harmonies on the lush choruses. Standouts include the opener, Norman Blake’s drum-heavy “It’s All In My Mind,” Gerard Love’s whispery, harmony-laden “Time Stops,” and Blake’s return to the sound of yesteryear with the gorgeous “Slow Fade.”

Another five years passed. The band thought that perhaps Man-Made was a little too minimalist, so they added layers of overdubs to Shadows, and as a result, a level of complexity exists in the songs that we haven’t heard since Songs From Northern Britain. Horns and major seventh chords grace Love’s opener, “Sometimes I Don’t Need to Believe in Anything,” and he paints a warm pastiche in “Into the City,” exclaiming, “Live wires in endless streets, the crowded valley’s alight / Breaking through the warm electric glow that stretches deep out of sight as we drive.”

But this is mostly Blake’s album: “Baby Lee,” with its orchestral flourishes laid on an acoustic background, the simple mid-tempo hymn “When I Still Have Thee,” and the piano ballad “Dark Clouds.”

The band went on hiatus for six years. Love started his own project, Lightships, which allowed him to explore the atmospheric sound he had been developing over the last few albums. Blake created the New Mendicants along with Joe Pernice of the Pernice Brothers. The members of the group approached 50, and as middle age is sometimes wont to do, their sound mellowed even more, and they wore their hearts on their sleeve. “It feels good with you next to me / That’s enough, that’s enough,” sings Blake on the opening track, “I’m In Love.” It’s their best song since “Near You.”

Love continued to focus on ethereal tracks that were nonetheless melodic as ever. “I Have Nothing More to Say” is mostly him and layered keyboards creating a dreamy soundscape. Blake fits the perfect words to the music in “The Darkest Part of the Night,” singing, “You’ve been living in a bad dream baby, I know / Been lost to the light / You’ve been living in the darkest part of the night.” Here is a long way from Bandwagonesque. It’s more than an evolution; it’s a transformation.

The band toured, but when it came to touring Asia and Australia, Love balked and abruptly left the group. “The idea of this tour eventually became a fork in the road and we have just agreed to go our separate ways,” he said on Creation Records’ Facebook page. “It’s not ideal for any of us but it’s as amicable as it can possibly be.”

So Teenage Fanclub replaced Love with McGowan, added Euros Childs as keyboard player, and continued on without Love, and with Love went one-third of the group’s setlist. Whether they will record another album remains to be seen; they released a single, McGinley’s aptly named “Everything is Falling Apart,” which is his best tune in years. If he can pull up the slack created by Love, then the band will be okay. Besides, two-thirds of a great band is better than no band at all.