The 5 Most Influential Artists of the 1970s

Influential artists of the 1970s? Are you kidding?

One thing to remember: the 1970s set the stage for pretty much everything we hard in the 1980s. Amid all the Three Dog Night, Lynyrd Skynyrd, there were some bright spots — beginnings of sounds that would change American pop and rock for the next 50 years. And no, I’m not talking about prog rock. 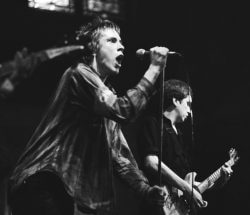 Some will say that the Sex Pistols were not the first punk band (The Ramones) or even the best punk band (many say the Clash), but the raw energy, the in-your-face, screw-everyone attitude, and their brief, fiery career are the stuff of which legends are made. And that makes them one of the most influential artists of the 1970s.

Sid Vicious and Johnny Rotten’s snarls have become the images of the punk rock movement; some point to the birth of punk to a concert on June 4, 1976 in which the Sex Pistols played for 40 people which included members of the Buzzcocks, Joy Division, The Fall, and Morrissey from the Smiths. Look to most post-punk and alternative bands of the 90s and 00s (Green Day, Blink-182) for the sound of the Sex Pistols still raging on.

Blondie helped establish punk rock as a melodic art form, and then they deftly took it and created new wave. I consider the angelic “Heart of Glass” one of the first true new wave songs. And while “Rapture” was not the first rap song as some have suggested (“Rapper’s Delight” beats it by two years), Blondie was one of the first mainstream groups to recognize the genre and use it to create a No. 1 song.

Debbie Harry was a force to be reckoned with, good looks and all. If it weren’t for Blondie, we may not have heard of the Go-Gos, the Bangles or any grrrl group of the 1990s.

I’m not a big Zeppelin fan. In fact, I’m probably one of the few people on this planet who don’t really like them. But I must give my props to them; you can’t mention the 1970s without mentioning Led Zeppelin. And it seems that pretty much any metal/post-metal/grunge/alternative/indie rock group will quickly give them a nod. They are considered one of the first metal groups, and Jimmy Page has influenced scores of guitarists.

I know, I know. Disco. But where would pop music be without the Queen? We wouldn’t have many pop stars today — acts like The Weeknd, Dua Lipa and Doja Cat are all throwbacks to what Summer and her contemporaries did in the mid- to late-1970s. Even Madonna, Mariah Carey and Beyonce have been influenced by Summer. Her smash hit “I Feel Love” was even added to the list of recordings compiled and preserved by the Library of Congress.

90 percent of the world has never even heard of Kraftwerk, and I can’t really name any song by them. But when I listen to the German electronic band, I hear the beginnings of new wave, techno and dance. Some hip-hop artists have pledge their allegiance to Kraftwerk. Martin Gore of the electronic dance group Depeche Mode claimed, “For anyone of our generation involved in electronic music, Kraftwerk were the godfathers.” In 2021, they were inducted into the Rock ‘n’ Roll Hall of Fame.

David Bowie was a chameleon during his career, easily changing his sound (and image) from glam rock and R&B to ambient and electronic music. He did this not as a reaction to the times, but in anticipation of them. “I don’t know where I’m going from here, but I promise it won’t be boring,” he once said. As a result, he trailblazed the way for dozens of musicians who looked to him as an influence, and his ability to stay relevant can be seen in acts such as Madonna, Prince and U2.

High Honorable Mention: Sorry, Bruce Springsteen, Pink Floyd and Marvin Gaye. You were influential, but not one of the most influential artists of the 1970s.

Omission: The Eagles. I’ve never understood how The Eagles sold 30 million copies of their greatest hits package. That aside, they are simply a popular band that just sticks out from the 1970s, playing lukewarm country-rock. I can’t really track any progression of the Eagles sound, aside from well, Don Henley (whom I like a lot better than his former group) and maybe Sheryl Crow. The fact that they gave us “Hotel California” is reason enough to ban them from any list.