The Beautiful Ones, Prince – Book Review 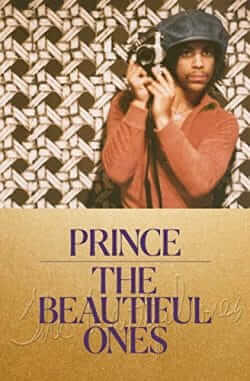 The death of Prince four years ago stunned us all, because, for one selfish reason, we had not heard enough from the artist. His output over the years had not diminished; in fact, just a year before his death, he released two albums—HITnRUN Phase One and HITnRUN Phase Two.

We all knew he had treasures waiting for us in the vault as well, and so far, we haven’t been disappointed, with two original albums of material and reissues of his two most celebrated albums, 1999 and Purple Rain. This year came news of a memoir that Prince himself helped pen. What better eulogy could we have than a look into his own life and some of his thoughts?

Prince hired a relative unknown, Dan Piepenbring, to help him with the project. As luck would have it, Prince died just a few months into it, before Piepenbring could actually interview him properly and pull together a coherent biography. What could have been a fascinating look into Prince’s life was cut short. Random House continued with the project anyway with what little material they had – some handwritten notes, along with never-before-seen photos from the famed vault.

The result, The Beautiful Ones, is the makings of a nice coffee-table book along with a fantastic long-form magazine article, but it’s not a memoir. Piepenbring, an advisory editor from The Paris Review, seems to be a great writer from what little he has to say about his time with Prince, but he simply doesn’t have enough to work with. Piepenbring was a fan, of course (aren’t we all?), and in his cover letter to Prince, he outlined his vision for the book:

If Prince wants to write a book, I want to help him write it: to put his voice on the page. . . . People might ask, Isn’t he too elusive to get on paper? There’s this idea that nonfiction destroys the mystery of the author – but when it’s done well, it only deepens that mystery.

The first 20 percent of The Beautiful Ones chronicles Piepenbring’s few encounters with Prince, and it’s good. Really good. Which makes you wonder, what would a proper biography of Prince have looked like? But as he promised, Piepenbring turns the computer over to Prince, and we get photos of his handwritten notes. Deciphering them is difficult when we get into his cryptic writing — “way 2 close 4 com4t” — which brings the readability down dozens of points and slows you down as you read. But then you realize that his flowery cursive has been translated to movable type a few pages later.

His notes consist of sayings (“If U’re funky, even on a ballad U’ll hear it. It’s just what U R”) along with remembrances of his childhood (“The Northside of Mpls. had 2 much testosterone 4 my taste growing up.”). Then at one point, it just stops, to be taken over by photos of Prince as a teenager, photos of his passport, storyboards for the video for “Kiss,” and quotes that he gave a magazine at one point during his career. You flip through these pages in a matter of minutes, and so getting through the book takes about a day. At $30, you feel like many did after buying some of his later albums—a feeling that there should be more to this than there is.

The quotes from The Beautiful Ones have been plucked from Prince’s career with care, and they give us more of a look into the artist than his own words. Perhaps the most poignant is the last one in the book, in which he told Essence magazine, “When I’m onstage, I’m out of body. . . . And that’s when something happens you reach a plane of creativity and inspiration. A plane where every song that has ever existed and every song that will exist in the future is right there in front of you. And you just go with it for as long as it takes.”

I have no doubt that Prince felt like that. He was able to see so much, especially in the prime of his career from 1981 to 1987. The Beautiful Ones is an example of the things we weren’t able to get more from Prince before his death. All we really have is his music, and I hope the vault will continue to stay open and deliver unheard-of music to us. That’s his legacy.

2 thoughts on “The Beautiful Ones, Prince – Book Review”