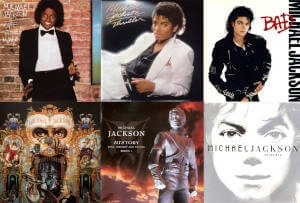 The answer may not be as clear, for Jackson had a few good albums — and many sub-par efforts. In this post, we dig down deep into each of his post-Jackson 5 output to see which solo album was indeed the best Michael Jackson album.

Disc 2 of HIStory, his greatest hits compilation, is all new material. It begins where Dangerous left off: The hip-hop infused “Scream,” a duet with his sister Janet. It exhibits a harder edge than most of Dangerous and features a catchy chorus — something that’s missing from his previous album. But two songs later, he falls flat. “Stranger in Moscow,” does absolutely nothing for almost six minutes — this is what skip on CD and mp3 players was made for.

Then there are the syrupy ballads. “Earth Song” — well, we’ve heard this before, haven’t we? He’s just trying to save the earth instead of its people. “You Are Not Alone” will always remind us of that naked video with Lisa Marie Presley that made us all uneasy. And “Childhood” is just a therapy session in which we all wonder what happened during Jackson’s childhood.

It gets worse. “Money” finds Jackson rapping — yes, rapping — and he has the nerve to cover a Beatles song (which he owned at the time). “Come Together” is somewhat funkier than the original, but that does nothing to make the cover refreshing and new.

There are few bright spots. “D.S.” is a rocker that at times gets a little repetitive but has some bite. And…that’s about it for bright spots. It’s easily his weakest album — almost an afterthought after putting together his compilation.

Next on our quest to find the best Michael Jackson album is Invincible — a title that suggests that’s what he’s wanting us to think of him. It even extends to some of the song names as well. “Unbreakable,” the opening track, seems innocuous enough. It’s upbeat and pleasant until the rap by the Notorious B.I.G. — quite a stunt considering he had been dead for four years. In fact, four of the songs on the album have the (feat.) tag on them, which we used to call duets. He wrote songs with seven different people. Why can’t just one person write and perform on a song anymore?

” Ultimately, the record runs too long, losing steam halfway through,” allmusic.com opined. Jackson seems to be playing catch-up on this album — a pattern we’ll see with much of his later output. A lot of the beats sound like the hits of the time — songs by Usher and Alicia Keys — and it has its fill of ballads. “You Rock My World” is surprisingly soft for a Jackson hit — it’s a gritty version of Thriller‘s “Baby Be Mine.” “Butterflies” is forgettable, and it showed with its No. 14 showing on the Hot 100 — hardly a smash for Jackson.

I thought I’d like Dangerous after hearing the opening single, “Black or White.” It featured a memorable guitar riff, a splash of acoustic guitar and a nice melody. Was he back?

Unfortunately, no. The opening track, “Jam,” takes up where “Speed Demon” left off — a percussion-heavy, tuneless cut that goes nowhere. “In the Closet” had Jackson detractors giggling, wondering if he really was in the closet. It sounds just like “Jam.”

In fact, most of Dangerous has that percussion-heavy sound popular at the time. It’s as if Jackson is trying to keep up with the times instead of leading the way. He even hired new jack swing wiz Teddy Riley to co-produce the album — the first post-Jackson 5 solo album that Quincy Jones didn’t produce.

As a result, everything has that same sparse, syncopated percussion track punctuated by Jackson’s hiccups and falsetto screams. “Remember the Time” is a little smoother; “Heal the World” is Jackson trying to recreate “We Are the World” — some of the lyrics are exactly the same. “Give in to Me?” “Dirty Diana.”

Some of the ballads, surprisingly, are worth a repeat: “Will You Be There” is gospel-tinged, with accompaniment by the Andre Crouch Singers, who also sing on “Keep the Faith,” a groove-tinged song with gospel chords and heavy synthesizers. But most of Dangerous is the same song played eight different ways.

With various side projects and Jackson’s maddening focus on trying to top Thriller in album sales, Bad took five years to come out. And every track sounds like he’s trying way too hard to top Thriller. Just the opening title cut, which tries to blend “Billie Jean” and “Beat It,” had people wondering if someone wearing makeup, feminine locks and a studded leather jacket really was that “bad.”

“The Way You Make Me Feel” is one of the highlights of the album, even though it bears a striking resemblance to Gavin Christopher’s “One Step Closer,” released the year before. This, unfortunately, was the video that had Jackson grabbing his crotch, and will forever be associated with the song.

“Speed Demon” is more of the hiccups and minimalism that we’d see in subsequent albums. Jackson included it to make the album “richer and sexier” than Thriller, but it is forgettable, as is “Liberian Girl” and his duet with Stevie Wonder, “Just Good Friends.”

The second side of the album is just Michael trying way too hard. “Dirty Diana” is his attempt at machismo, and it’s tuneless with a lot of guitars. “I Just Can’t Stop Loving You” is weak, and the video for “Smooth Criminal,” released with a lot of hype, didn’t live up to the cinematic offerings of the mini-movie for “Thriller”; its bassline even sounds contrived and calculated.

The only other highlight is “Man in the Mirror,” which was written by Glen Ballard and Siedah Garrett. Oddly, two songwriters had to come in and save the album for Jackson, who wrote most of the other mostly inferior tracks.

I’ve already said most of what I can say about Thriller in this post. Save for a few corny moments, it’s close to perfect. “Billie Jean” is bitter and slick, and “Beat It” blurs the line between R&B and rock. He broke all the rules with this album, and it shows, with a mind-boggling 66 million copies sold. The only eggs on this album are the saccharine duet with Paul McCartney, “The Girl is Mine,” and the Rod Temperton ballad “The Lady in My Life.”

That being said, there are some cracks showing in the best-selling album of all time. It shows its age. There’s the saccharine duet with Paul McCartney, “The Girl Is Mine,” and the filler tunes “Baby Be Mine” and “The Lady in My Life.”  “P.Y.T. (Pretty Young Thing)” is R&B filler, and “Human Nature” is yacht rock at its worst.

Finally, we have an album where it sounds like Michael Jackson is having fun. He’s not trying to be bad, dangerous, invincible, or thrilling us. The opening track, “Don’t Stop ‘Til You Get Enough,” is Michael near his peak. His falsetto voice is less feminine, more like Prince as he ushers in a new type of post-disco sound — something a little less polished, a little more groove.

“Rock With You” was a surprise hit — it’s so laid back, full of 70s Lou Rawls beats that you forget how smooth Michael could be. He makes this cut danceable, even though it’s middle of the road.

“Workin’ Day and Night” is an even funkier version of “Don’t Stop ‘Til You Get Enough” without the hummable melody. But rarely does Michael get bolder than this cut. “Off the Wall,” unfortunately, has little to offer, but it did crack the Top 10.

We then step into ballad territory. “Girlfriend,” a Paul McCartney throwaway that he wrote for Jackson, released on Wings’ London Town, and then let Jackson use it on Off the Wall. It’s typical McCartney sap, signs that he could do much better. Jackson rebounds with “She’s Out of My Life,” which is him at his most vulnerable. It’s a beautiful ballad with someone predictable lyrics, but it shines on the second part of this album.

Jackson goes out with a bang. “Burn this Disco Out,” his sendoff, is a knife in the heart of the disco sound and a transformation to a more upbeat R&B motif — something we’d see more of in the future.

Is this a disco album? Perhaps. Is he breaking new ground as he did with Thriller? Maybe not. But I’d rather listen to Off the Wall than Thriller right now. It’s the best Michael Jackson album.

Looking back at his career, there’s no doubt Jackson was talented. He was a great entertainer, but after several less-than-stellar albums, his prowess as a songwriter — and even a singer —raises some questions. With Off the Wall and Thriller, he seemed to have caught lightning in a bottle and spent the rest of his career trying to catch it again.