Album of the Year: The Furry White Album, Famous Groupies 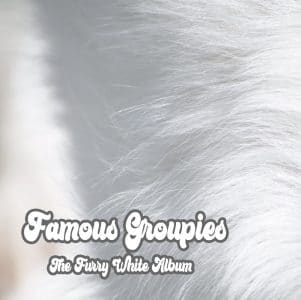 Famous Groupies have been busy. In 15 months, they’ve released three albums: their sparkling debut, Rehearsing the Multiverse; a compilation consisting of their debut album and unreleased material, Double Entendre; and their latest release, The Furry White Album.

The Furry White Album continues to cull from the treasure chest of songs lead singer Kirkcaldy McKenzie has at his disposal, and it deservedly receives Hooks and Harmony’s 2020 Album of the Year.

If the title sounds like a Beatles parody, it is — sort of. It really should have been called The Furry Ram, for McKenzie channels Paul McCartney’s life-on-the-farm mentality that is apparent on Ram, his 1971 solo album with wife Linda McCartney. In fact, Famous Groupies have positioned themselves as the Rutles of Paul McCartney, although the comparison is more pastiche than parody.

From the opening vocals on “One Trick Pony,” which sounds just like Wings’ “Getting Closer,” you’re launched into a McCartney tribute. Patrick McKenzie, Kirkcaldy’s grandfather, apparently hung out with the former Beatle during his Wings phase and wrote hundreds of songs himself, many of which capture McCartney’s style perfectly. The result, like their debut album, is like finding a lost Macca album.

The influences are everywhere. McKenzie’s voice recalls Paul in his early solo years.  “Bombs Away!” is a more upbeat version of “Monkberry Moon Delight” or “Nineteen Hundred and Eighty-Five,” while “Count to Eight” is a replica of the Beatles’ “All Together Now,” right down to the counting (“One, two, three, four, can I play with you a little more?” vs. Lennon and McCartney’s “One, two, three, four, can I have a little more?”)

This is not to say that the album is not original. It takes a lot of songwriting chops to write in the style of someone so talented — it’s like trying to paint in the style of Rembrandt. The group has created an amazingly beautiful album that brings to mind the best of McCartney’s songwriting. Instead of “Junior’s Farm,” we have “Maggie’s Farm,” complete with a bagpipes solo that brings to mind “Mull of Kintyre.” “Please Stay” is a spot-on version of the Beatles’ “Oh! Darling,” and “The Harmony of Love” sounds like a lost outtake of “Band on the Run.”

But when McKenzie (the grandfather, or grandson?) stretches his wings and flies solo, he shows us the talent inherent on this album. “Little Bird” is perhaps the best song I’ve heard in years. It’s a soft piano-led jaunt that is soothing and full of contentment. And “Bonnie Parker” is an acoustic gem whose sing-song melodies stand out.

That’s where McKenzie’s work excels: The melodies on The Furry White Album are effortless, soaring at times and traveling up and down the scale at others. There is very little harmony on here, which shows that the melodies can stand on their own. Kirkcaldy says his grandfather had “a love affair with the music of Paul McCartney, which I assume is why much of his older material sounds a great deal like Paul’s early work.”

People say that imitation is the sincerest form of flattery, and the McKenzies have shown their admiration for one of the greatest songwriters of all time — and done it well. What’s not to love about an album that sounds like Ram?