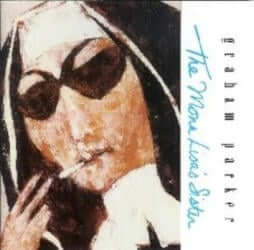 Graham Parker could be described as the poor man’s Elvis Costello. While Costello boasts five Top 20 albums in the United States and 11 Top 10 albums in the U.K., Parker managed only two albums that grazed the U.S. Top 40— three in the U.K., despite having a discography that’s almost as lengthy as Costello’s.

Both artists flourished during the late 1970s and early 1980s, and they both found success both with their own band and as solo artists. They played musical chairs with record labels in the 1980s.

It’s this battle with record labels and Parker’s distaste for the music industry that led to 1988’s The Mona Lisa’s Sister, which was his first release with RCA after a bitter dispute with Atlantic Records. It was arguably his best album since 1980’s The Up Escalator.

With Parker’s smoke-filled delivery, clever, biting lyrics, and his head-on pop sensibilities, one of his songs could easily be mistaken for Costello, with a touch of Van Morrison. Nowhere is this more apparent than on the lead track, “Don’t Let It Break You Down,” where he goes after music journalists with the tenacity of a pit bull: “Some people are in charge of pens that shouldn’t be in charge of brooms / They have the nerve to rip up a man’s life in a paragraph or two,” he sings.

Surprisingly, The Mona Lisa’s Sister was considered to showcase a softer, kinder Parker, but it doesn’t show in many of his lyrics. Accompanied mostly by an acoustic guitar and organ, he paints some shocking imagery. In “Under the Mask of Happiness,” he sings, “All the dirt’s lying under the carpet / He swallowed a drink and then checked her heartbeat / Her wedding gown has been burned to ashes / Fanned by the flutter of her false lashes.”

At times he pulls back the mask of anger, and his stories show a bit of vulnerability and sweetness. On “I’m Just Your Man,” a heartfelt ballad, he confesses, “I’m not a page in history not something that bold / I’m not the greatest mystery that was ever told / I may not be who you wanna spend a whole life with alone … I’ll tell you what I am – I’m just your man.”

Although Parker may not have the melodic touches Costello has, he more than makes up for it in his lyrics, which are sarcastic and sometimes disturbing. He saves most of his vitriol for the record companies. “Success” has him raging, “They say they want you for your colourful evocation / the way you turn a cliche into a sensation / But all they ever wanted was that same vibration / The one that shimmers round success.” He then repeats the title of the song ad nauseum, clearly putting the emphasis on the syllable “Suck”.

There are some duds on the album: “The Girl Isn’t Ready” is a lite-reggae number that just sounds out of place on such an emotional, cynical record, as does his cover “Cupid,” which thankfully fades out after two and a half minutes.

At the time, The Mona Lisa’ Sister was seen to be a comeback for Parker, who had floundered through the mid-1980s after some early success. Rolling Stone recognized the album’s place in history, putting it at No. 97 on its list of the 100 best albums of the 1980s.