The New Beatles Reissues: What it REALLY Means 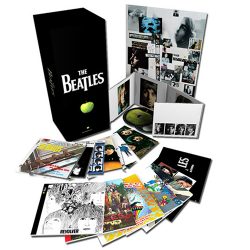 Many people have been asking me if I ran out and bought the Beatles reissues or the Beatles Rock Band on 9/9/09. And I quickly answer, “Nope.”

Here’s the deal: I don’t have any Rock Band instruments, so I would have to buy the deluxe package, which puts me out about $250. As for the stereo box set, well, I simply can’t tell that big a difference. Popdose did a fantastic album-by-album analysis of the new CDs, noting the fresh sound, the little nuances that have emerged from the remastering, but these guys are audiophiles with a much better ear than I.

Me? I can’t tell the difference between a 128 kbs and 320 kbs mp3. When I first heard a CD, I thought it sounded like an LP without the crackle. It’s a failing of mine – I wish I could notice that the drums sound more pronounced in “Something,” but I’m paying too much attention to the song structure and the notes. I can’t see the trees for the forest.

No, for me, the reissues simply show that 50 years later, the Beatles are still HUGE.

As in mammoth. Billboard.com reports that in the first five days alone, sales in the U.S., U.K. and Japan totaled more than 2.25 million copies. These are for reissues of albums that most fans already have, albums that were recorded 40-45 years ago. In South Korea, the Beatles occupy 16 of the top 17 positions on the HotTracks album chart. They’re charting in France, Australia, Sweden, Norway and Denmark, to name a few.

In light of this news, I refer back to West Archer’s infamous comment on my post, 20 Reasons the Beatles are the Greatest Band Ever:

Fact is, The Beatles are not that great of a band (dubious at best) and you fans are scared of their demise.

And then I laugh – a hearty chuckle, deep and satisfying – at his expense, even though I know he probably wrote it to get a rise out of me.

These guys aren’t going away. What was only an 11-year relationship – only seven of which was actually spent recording albums – changed rock and roll forever. One of their members has been dead for 29 years and they’re still selling albums by the truckload.

We’ll probably never see anything like them again, although I yearn for something to take us out of these Dark Ages of music. Listening to these albums – either reissued or original – is like watching Michael Jordan sink a jump shot at the buzzer or Tiger Woods driving a ball down the fairway at Augusta. It’s something you’ve never witnessed before or will never witness again.