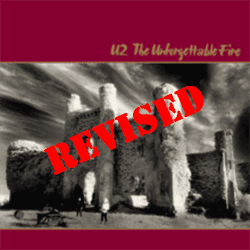 I still remember the first time I heard U2.

It was late 1984, and I was in the living room playing Nerf basketball and listening to the radio from my parents’ coffin-sized wood-paneled stereo. The DJ announced the new single from the group, “Pride (In the Name of Love),” from the upcoming album The Unforgettable Fire. I had heard of the group – probably through my UK-published Rock Yearbook that I received each year for Christmas. But in the pre-Internet days, you couldn’t really hear what was going on across the pond.

I wasn’t immediately taken by “Pride,” but once I got The Unforgettable Fire that Christmas (along with the 1984 Rock Yearbook), I played the album nonstop. And with that, U2 became my first musical obsession.

The Unforgettable Fire was a musical departure for U2, who had previously relied on a post-punk, anthemic sound designed for arenas (“Sunday Bloody Sunday,” “New Year’s Day”). Luckily, I caught them at the right time. I was 16, looking for music that had meaning (Isn’t that what most 16-year-olds were looking for? See shoegazing). The band’s previous release, 1983’s War, was too angry. But the synthesizers, strings, and the Edge’s minimalist delayed guitar playing sounded haunting and mysterious. I started to understand the meaning of terms such as “atmospheric” and “textured” in reference to music.

There were problems with the album. For one, there were a few inferior tracks. “4th of July” was an Eno experiment – about two minutes of the Edge making weird noises on his guitar. A second, “Elvis Presley and America,” was an improvisation based on a slowed-down version of the opening song, “A Sort of Homecoming.” It was over six minutes long and was pretty much the same thing over and over. Both songs were on the second side, flanking the best song on the album, “Bad.” It took a lot of fast-forwarding to jump over these songs; they just didn’t get better with time.

Second, it wasn’t long enough – only 10 songs timing in at about 42 minutes. I found myself listening to it repeatedly because it seemed, well, unfinished. And the group has admitted as much, saying they felt rushed during the recording sessions and as a result, left some things incomplete. However, there were several demos and concepts of songs that didn’t make it onto the album: “Boomerang I,” “Boomerang II,” “Love Comes Tumbling,” “The Three Sunrises,” “Bass Trap,” “Yoshino Blossom,” “Sixty Seconds in Kingdom Come” and “Disappearing Act.”

Some of these songs made it to B-sides and other EPs. Others were unearthed when U2 re-released the album in celebration of its 25th anniversary. Several are easily better than “4th of July” and “Elvis Presley and America” and lend to the somber, airy feel of the album.

The first four songs are golden – one of the best starts to an album – but it makes the album somewhat top heavy. My goal is to make the whole album longer, getting rid of inferior tracks, and spreading the better tracks throughout the album to make it a more consistent experience.

I took the two best B-sides – “The Three Sunrises” and “Love Comes Tumbling” – and added two instrumentals. One, “Bass Trap,” is considered by most U2 fans to be superior to “4th of July.” A second, “Yoshino Blossom,” is an instrumental that sounds very similar to their hit “New Year’s Day” from the previous album, War. But the name contributes to the theme of the album (The Unforgettable Fire was taken from an art exhibit about the bombing of Hiroshima).  It suggests a renewal from the unforgettable fire, the devastation of Hiroshima.

I also placed “Pride,” a song that references. the Rev. Martin Luther King, next to “MLK,” another song about the civil rights leader. It gives more weight to the second part of the album, ending it on a more positive note.

So here is the new, improved Unforgettable Fire, longer, more consistent and improved: