The Perfect Pop Song: That Thing You Do! 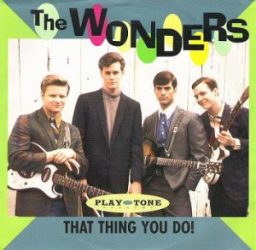 In his song “You Never Even Call Me By My Name,” David Allan Coe sings about how his friend claimed to have written the perfect country and western song. Coe disagreed, saying that his friend hadn’t mentioned “mama, or trains, or trucks, or prison, or gettin’ drunk.” His friend wrote another verse mentioning all these things, and Coe then agrees that it was the perfect country and western song.

I think that’s exactly what Adam Schlesinger did when he wrote “That Thing You Do!”. He used almost every trick in the book to create the perfect pop song. Granted, that’s what he was supposed to do: write a song that a fictional one-hit wonder (like “The Wonders”) would sing in Tom Hanks’ movie “That Thing You Do!” And I mentioned this song’s perfection a few months ago when counting down the Top 10 Perfect Pop Songs.

The ingredients to a perfect pop song

But after listening to this gem the other night on my way home from a meeting, I was amazed by the number of overt references to Beatles/British invasion groups Schlesinger used. It’s a veritable recipe for a pop song, with almost every ingredient included:

If you’re having trouble imagining all of these techniques, here’s the song. Listen closely, and you’ll hear it all.

13 thoughts on “The Perfect Pop Song: That Thing You Do!”