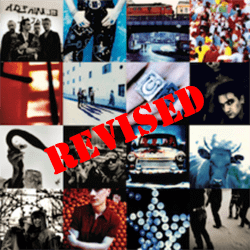 Rock critics usually place U2’s Achtung Baby among the greatest albums of all time. Rolling Stone ranked the album as the 62nd greatest ever, and it topped Spin‘s 2010 list of the 125 most influential albums in the last 25 years.

And I hated it.

Critics liked U2 going out on a limb, daring to shed their serious, introspective image in favor of a more modern, materialistic persona. Achtung Baby was supposed to be U2 mocking themselves. I saw it more as U2 selling out, flipping off its legions of fans who took them almost as seriously as they took themselves. (Little did I know that they would continue their slide into hedonism with the next few albums, but that’s my next post.)t

Over the past 20 years, I have tried to approach the album from some new perspective, to try and appreciate something about it and hear what everyone else seems to hear. And it’s never worked. The album has quickly gone from unlikeable to boring without any goodness in between.

So screw the new, more modern version of U2. I wanted The Joshua Tree II. But how do I do that, given the feedback, distortion and overprocessed vocals and preening?

Enter the Super Deluxe Version of Achtung Baby, which not only unearthed unreleased tracks but also unveiled an early mix of the album, dubbed the “Kindergarten” version. It was more of a stripped down sound – more direct, less industrial and well, nicer.

Granted, there are some songs that are just unfixable. Despite its popularity, I absolutely despise “Mysterious Ways.” It was U2 at its funkiest, but it was like listening to the Carpenters do heavy metal. It just never worked for me, and it became the whipping boy for my hatred of U2 during the 1990s.

I’m finding that I can more than tolerate this version. It’s an easier transition to their later material, with a mix of old and new. Perhaps if U2 had eased me into their new sound, I might not have rebelled so much.

Up next: I try to salvage Zooropa and Pop. It won’t be pretty.