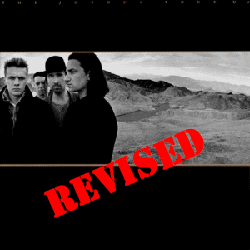 At the risk of venturing into hyperbole, I could argue that The Joshua Tree changed my life.

I was 18, at that dangerous intersection of life where teen angst meets free thinking and introspection. Everything had to have meaning to me. I was contemplating life beyond proms and algebra, thinking of life, death, God and the universe. And here came U2, nearing their creative peak, singing about life, death, God and the universe. It was a perfect storm.

I drank the Kool-Aid and became a U2 disciple, went to their concert at the old Omni in Atlanta, wrote about it for the student newspaper, and received a Georgia College Press Association award for Best Music/Concert Review. I realized I liked to write, and I pursued a career in journalism. And here I am, 25 years later, writing about the same album.

In some ways, The Joshua Tree was a continuation of The Unforgettable Fire, with the same atmospheric elements, strings and the Edge’s guitar sound. But there was a new grittiness emerging from the band as Bono explored the roots of American music. I liked almost every song on the album. Almost.

“Bullet the Blue Sky” was played on one chord and featured very little melody and some spoken word preaching from Bono. But it’s a favorite among fans and is an integral part of the album, whether I liked it or not.

But there is no excuse for “Trip Through Your Wires,” an off-key, unimaginative blues song that is like nails on a chalkboard. It’s a giant turd on a spotless floor, a zit on the face of a supermodel. It must. Go.

I think everything else is perfect.  But like The Unforgettable Fire,  The Joshua Tree could be longer. With something like this, you just want it to continue for as long as possible. So I’ve taken one track away and added three B-sides and outtakes to the album – songs that either add to the feel of the album or are considered some of their better B-sides.

The first new addition is placed at the beginning of The Joshua Tree: “Beautiful Ghost/Introduction to Songs of Experience” is an eerie instrumental that picks up where The Unforgettable Fire left off. Halfway through the song,  Bono conjures up some spirits by quoting a William Blake poem: “Hear the voice of the Bard/who present, past and future sees/whose ears have heard the Holy Word/that walk’d among the ancient trees.” If ever there was an ancient tree, it’s the Joshua Tree.

This sets the tone for “Where the Streets Have No Name,” the first song in what fans call the Holy Trinity of the album. This is followed by “I Still Haven’t Found What I’m Looking For” and the amazing “With or Without You.” No need to break those three up.

Now the original track list had the fading peaceful final sounds of “With or Without You” interrupted by the jarring drums and bass of “Bullet the Blue Sky.” I felt that needed a bit of a transition. So I added “Spanish Eyes,” the B-side to “I Still Haven’t Found What I’m Looking For.” It’s a smoldering, urgent, passionate number that would serve as a bridge to the stark, gritty “Bullet the Blue Sky.”

It’s pretty much the way it is on the original throughout the next few songs: “Running to Stand Still,” “Red Hill Mining Town,” “In God’s Country.” In place of “Trip Through Your Wires”, I’ve thrown a bit of a curve, choosing “Heartland” from U2’s next album, Rattle and Hum. It was recorded during The Joshua Tree sessions but was scrapped at the last minute. It sticks out like a sore thumb on the rootsy Rattle and Hum. It fits much better here.

Some may say that the result is too heavy and serious, but that’s what I like about this album. This is just more of it.

Coming next: The Joshua Tree as a double album