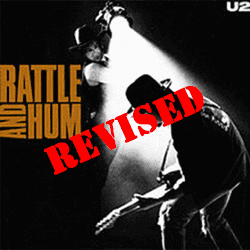 So how do you top a multi-million selling, critically acclaimed album such as The Joshua Tree?

You make a movie, of course.

I should have seen it coming – U2 as movie stars, having the ego big enough to release a movie about themselves and their love of – gasp! – American music. Didn’t they understand that the reason we listened to them and Duran Duran all these years was because American music sucked?

I saw “Rattle and Hum” in the theater several times, even sitting through Eddie Murphy’s “Coming to America” five times that summer just so I could see the trailer for the U2 movie. And while I enjoyed the movie – it was like being at a concert – the soundtrack, which consisted of some new music interspersed among live cuts, was weak. Save for the tear-jerker “All I Want is You,” the new material embraced the twang and tuneless patterings of the heartland of American music.

And given the lack of singles and B-sides during this era, there’s not much here to work with to improve Rattle and Hum. One of the problems with the album is that it can’t make its mind up whether it’s a live album or a studio album. Just when you think it’s a studio album, you hear the crowd noise as U2 launches into a cover of a 60s tune or one of their old hits.

So by my count, that’s two covers, six live cuts, and two songs that aren’t even written or sung by U2. WTF?

I prefer the studio cuts; very rarely does a live album live up to all the overdubs and professionalism of a studio album. I used “Heartland” for my Joshua Tree redux, so that leaves us with “Van Diemen’s Land”, “Desire”, “Hawkmoon 269”, “Angel of Harlem”, “Love Rescue Me”, “When Love Comes to Town”, “Heartland”, “God Part II” and “All I Want Is You”.  That’s a start.

“Silver and Gold” is a curious song; written back in 1985, it was left off of The Joshua Tree. Its raw, blues-tinged feel is a perfect fit on Rattle and Hum, especially since a live version was included on the soundtrack. Use the studio version, which was a B-side to “Where the Streets Have No Name,” and we have another track.

I’ve also thrown two B-sides on the album – “Hallelujah (Here She Comes)”, which sounds like a rewrite to “Angel of Harlem,” and “A Night at the Heartbreak Hotel.” The result is not a great album by any means, but I think it’s an improvement.

Next: Can I make a version of Achtung Baby that I like?